General Hospital Spoilers: Rafe Opens His Eyes and Sits Up – Did Nina Really See This Or Is She Hallucinating? 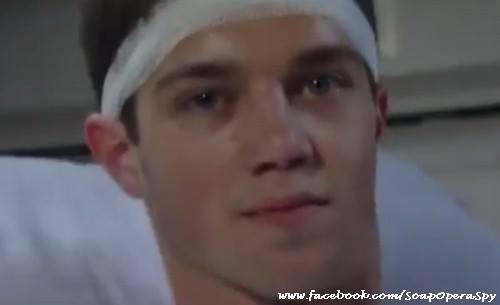 ABC’s popular soap opera General Hospital took a dark turn last week when Port Charles teens Rafe and Molly were in a serious car accident while Rafe was trying to escape from the PCPD. After Rafe crashed full speed in to a police barricade, he and Molly were both rushed to the hospital. Despite a serious head injury Molly seemed to fair okay, minus a groggy memory of the events leading up to the crash. Rafe on the other hand began having seizures and needed immediate brain surgery.

Dr. Patrick Drake was forced to operate on Rafe, despite the fact that Rafe had just confessed to causing the previous port Charles car accident which killed Patrick’s son Gabriel. Despite his protests Dr. Liesl Obrecht sent Patrick in to the operating room with Rafe, and when he reported back to Silas and Sam with devastating news. The surgery didn’t go smoothly, and Rafe was now brain dead. After it was revealed that Rafe was basically dead already and the only thing keeping him alive was life support, his friends and family began to mourn their loss.

Once fans came to terms with the fact that Rafe was exiting the Port Charles canvas, something insane happened. Nina Clay was left alone in the hospital room with brain dead Rafe, and he opened his eyes and sat up in bed. Could it be possible that Patrick misdiagnosed his injuries and he is not brain dead, and very much alive? Or, is Nina Clay so certifiably crazy that she is hallucinating now and thinks that Rafe is alive and he really isn’t?

If a miracle occurs and Rafe really is alive, then there is a good chance he won’t be for long. Rafe is the one person in Port Charles other than Nina’s nurse Rosalie that knows Nina Clay can actually walk and is pretending to be paralyzed from the waist down as part of her scheme to get revenge on his Uncle Silas. Considering how crazy Nina is, no one would be shocked if she tried to kill him in the hospital room before any one realized he wasn’t really dead.

So General Hospital fans, what do you think is going on with Rafe? Do you think he could really be alive, or is crazy Nina just imagining him waking up? If he is alive, will Nina try to kill him in his hospital room? Let us know what you think in the comments below and don’t forget to check CDL tomorrow for more General Hospital spoilers.