General Hospital Spoilers: Nikolas and Ric Both Want Elizabeth – Can Ric Be Trusted – How Will Liz Choose? 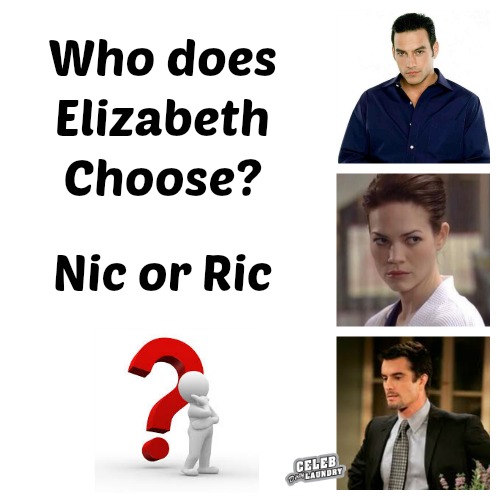 There is an interesting love triangle in the works on ABC’s popular daytime drama General Hospital. Fans are already speculating whether Elizabeth will choose Nikolas Cassadine or Ric Lansing. She has a history with both men, and now they are both vying for her attention. Is Ric really the changed man he wants everyone to believe he is though?

Since Ric waltzed back into Port Charles after nearly five years of being MIA, he has been nothing but honest and nothing like the Ric Lansing we used to know. He has made an effort to make amends with his baby-mama Alexis, his estranged half-brother Sonny Corinthos, and his teenage daughter Alexis. He also has made it very clear he only has eyes for Elizabeth, and has stood by her even though he knows she still has feelings for Nikolas.

The Ric Lansing on General Hospital these days is almost too good to be true. Any long time GH fan can tell you that the lawyer has done a complete 360 degree turn since he returned to Port Charles. The Ric Lansing we remember was always scheming up revenge plots on Sonny, worked for the cold-blooded mobster Anthony Zacchara, was a liar and a blackmailer, and even slept with his own step-daughter.

Even though Ric Lansing has denied having anything to do with Julian Jerome’s bankroller and all signs are pointing towards the Luke Spencer Imposter, it still seems too coincidental. What are the odds that Ric Lansing returned to Port Charles the same week that Sonny discovered Julian was being bankrolled and a Luke Imposter began roaming around Port Charles determined to take down Sonny. It really is hard to believe he had absolutely nothing to do with it.

Do you think Ric Lansing has really changed? Or is it just a matter of time before his true colors begin to shine through? Should Elizabeth choose Nikolas Cassadine or a possibly changed Ric Lansing? Let us know what you think in the comment section below.

I hope she picks Nikolas

It’s hard to know whih way the story will unfold. The thing we have to keep in mind is that while Nik is a straight-shooter, there is a definite possibility that Ric is not! Yes, his behavior is great now but will his old self begin to come through his new paint job?