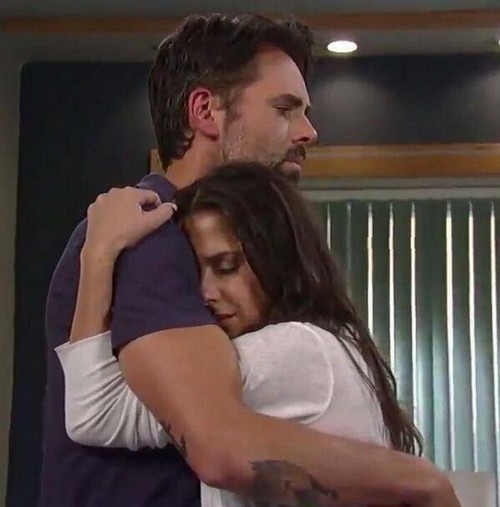 General Hospital spoilers tease that Sam and Patrick will be growing closer over the course of fall, and will take their relationship to the next level. GH fans have been pushing for the SamTrick coupling since it became clear that Robin and Patrick’s marriage was over, and Sam and Patrick developed some amazing chemistry while they have been investigating Rafe’s car accident that killed Patrick’s infant son Gabriel.

General Hospital spoilers in the September 29th edition of ABC Soaps In Depth tease, “While all the madness is unfolding [at Crichton Clark], Patrick and Sam are sharing Chinese food, fortune cookies, and more than a little bit of chemistry. When their conversation gets painfully personal, might they share more than just an eggroll?” GH’s Ron Carlivati adds, “Patrick now ‘knows’ that Jason is dead, although the audience knows that’s not true at all. So Patrick’s conscience is clear, he no longer feels as if he’s keeping a secret from Sam.”

So, there is a very good chance that the GH fans will get the SamTrick couple they have been pushing for, but how long will it really last? General Hospital spoilers recently revealed that The Young and the Restless alum Billy Miller has been cast as Jason Morgan, and the character will be returning to Port Charles. In fact on the September 15 episode it appears that Jason may be on his way to escaping from Crichton Clark! Once Jason Morgan returns, what are the odds of Sam choosing Patrick over her not-so-dead husband Jason? And, once the truth comes out that Patrick knew all along Robin was working on Jason Morgan at Crichton Clarke, Sam and Patrick’s friendship will most likely be over as well.

What do you think, GH fans? How do you feel about the writers putting Sam and Patrick together, just to rip them back apart when Jason Morgan returns? Do you think Sam will ever forgive Patrick when the truth comes out and she learns that he knew about Robin trying to revive Jason? Or, is there a slight chance that Jason will be so damaged when he returns that Sam actually chooses to stay with Patrick? Let us know what you think in the comments below and don’t forget to check CDL tomorrow for more General Hospital spoilers.