General Hospital Spoilers: Sonny and Carly Together Again – Franco Gets Jealous – How Crazy Will He Become? 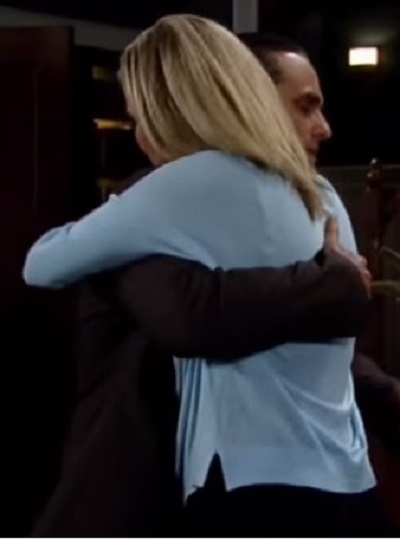 There is a dangerous love triangle developing on General Hospital. Carly just moved her boyfriend and former serial killer Franco into her house. However, she is devoting all of her time to her ex Sonny and his current situation with Ava Jerome. According to a General Hospital spoiler video, Carly’s devotion to Sonny is bringing out a jealous streak in Franco and has him questioning whether he will lose the love of his life to the brooding mobster.

Carly and Sonny have a long sordid history on General Hospital. When the going gets tough for Carly and Sonny, they always wind up falling back into old habits — and falling in bed with each other. As Morgan pointed out to Franco, Sonny will always come first in Carly’s life, regardless of whether she is in a relationship with another man or not.

In a recent General Hospital spoiler video, Carly and Sonny can be seen sharing a heartfelt moment as they hug — and Carly reassures him she will always have his back; she will be “watching Ava like a hawk.” Meanwhile, Franco confides in Kiki that he is concerned about Carly and Sonny’s closeness and appears jealous of their relationship.

For those of you who aren’t familiar with Franco’s history, he was at one point a sociopath wreaking havoc on the town of Port Charles, kidnapping and attempting to kill multiple characters. He even claimed to be the bomber at Sonny and Brenda Barrett’s wedding. It was recently revealed that Franco had a brain tumor, which was altering his behavior and causing a personality disorder. Once the tumor was removed, Franco was as good as new, and he then began a secret relationship with Carly (who he previously tried to kill).

Since Franco’s tumor was removed, he seems to be on the straight and narrow. However, he hasn’t really had any reason not to be. He saved Carly from his psychotic mother Heather and they began a relationship and his Mom was locked away. Life has been good for Franco. Until now. But, could his jealousy and the chance he is losing Carly bring back the old murderous psychopath Franco?

What do you think General Hospital fans? Will Sonny and Carly wind up sleeping together while she is “watching his back?” And, what about Franco? Could Sonny stealing Carly away from him trigger something in his frail mental health and cause the old crazy Franco to return? Share your thoughts and theories in the comment section below and don’t forget to check CDL for more General Hospital spoilers!