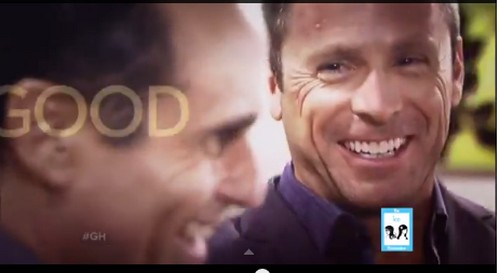 Soap operas always seem to take it up a notch during the summer time, and ABC’s daytime drama General Hospital is no exception. GH has released an all new spoiler video, teasing tons of drama and crazy twists headed towards Port Charles. Kimberly McCullough recently revealed she would be appearing back on General Hospital as Dr. Robin Scorpio-Drake for a brief stint, and she can be seen in the spoiler video along with her husband (maybe not for much longer) Patrick Drake.

The most intriguing part of General Hospital’s new summer spoiler video would have to be Maxie announcing she is getting married. Sparks have been flying between Maxie and Det. Nathan West, but she is most likely referring to her boyfriend Levi. Maxie’s new beau, which fans seem to loathe, is not a citizen of the United States, and it was recently revealed that his visa is expired. We predicted a few weeks ago that Maxie might marry Levi to prevent him from being deported, and it looks like we were unfortunately right.

The spoiler video also contains an interesting clip of Julian Jerome and Sonny Corinthos laughing and seemingly joking with each other, which I think we can agree is super strange. Another hilarious clip involved Liz and Brittany both volunteering at the kids’ day camp, and Liz throws a ball at Britt and it hits her in the back of the head. So, it looks like the Liz-Nikolas-Britt love triangle will really be heating up this summer as well.

Check out the new General Hospital spoiler video and let us know what you think. Will Maxie actually go through with the wedding to Levi, or will she come to her senses? What could Julian and Sonny possibly be laughing about? And are you Team Britt or Team Liz. Feel free to share your thoughts in the comments section below and don’t forget to check CDL tomorrow for more General Hospital spoilers.