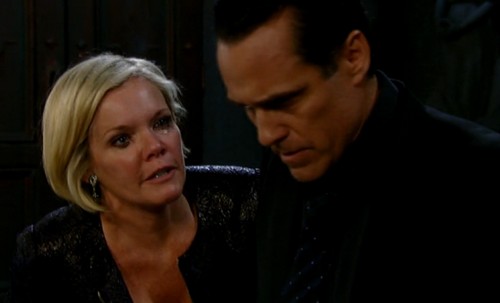 The month of May is here and according to General Hospital spoilers, GH fans are in for a treat. May Sweeps are upon us, which means GH writers are upping the ante and bringing viewers some insane storylines to boost the soap opera’s ratings. There are some pretty crazy plot-twists in the making on General Hospital, and GH spoilers tease they will all be revealed over the course of the next few weeks.

Guest star Donna Mills bid Port Charles adieu on May 1st, however before she left her character Madeline revealed to Det. Nathan West that his sister Nina Clay is very much alive. During the month of May Nathan, Sam, and Silas will all experience fall-out from the shocking reveal. And General Hospital spoilers teased there will be a new character arriving in Port Charles, a woman in her mid-forties, and rumor has it would be Nina Clay, alive and kicking. How insane was it that after all of this time of thinking Nina Clay was in a coma, that she just waltzed into Port Charles?

Also, fans have been speculating for months who is running around Port Charles hiding behind a Luke Spencer disguise. General Hospital spoilers for the month of May tease that Luke (or Fake Luke) is bound and determined to get Tracy Quartermaine down the aisle before the month is over. However, he will have his hand full with Tracy’s son Ned, who is bound and determined to make sure his Mom Tracy doesn’t make it down the aisle with Luke.

With all of the drama surrounding Luke and Tracy’s wedding, Sonny Corinthos might finally catch a break and Luke may back off on his revenge vendetta to bring down the mobster, and Sonny needs all the break he can get. During the month of May, Sonny Corinthos will continue to spiral downwards and make horrible decisions. As the web of lies begins crashing down around Sonny and Ava, Corinthos could lose both his sons, his girlfriend Olivia, and his sanity. Rumors have been circulating for a while that Sonny and Ava Jerome actually get married during the month of May, so that they can’t testify against each other in court regarding AJ and Connie’s murders.

Also during the month of May, General Hospital fans can expect to see the iconic Port Charles Nurses Ball. GH spoilers tease that there will be some old faces from GH past showing up for the event, which will air from May 8th – May 12th. Rumors have been making their way around the internet that Robin Scorpio-Drake might return for the even and bring her friend Jason Morgan with her. Morgan’s return opens up a whole new can of worms – we might just find out who will be replacing Steve Burton in the popular role!

So General Hospital fans, how excited are you for the Nurses Ball? It’s a long-standing tradition that unexpected guests show up for the event, who do you think will make a surprise appearance this year? And, if Jason Morgan does return to Port Charles, who would you like to see playing the part? Let us know what you think in the comments below! And, don’t forget to check CDL tomorrow for more General Hospital spoilers.

Fans of GH on Soap Opera Spy are going nuts with anticipation over who is cast as the new Jason Morgan:

Steve Burton signed a contract with YR for another year. It has to be Michael or Billy. I am greedy, I want to see them both on GH!

If Jason is either Billy Miller or Michael Muhney, that is another huge coup for GH, and a big slap in the face to Jill Farren Phelps

I think that not only is Nina alive, her baby is too. And that it’s Levi.

I’m keeping my fingers crossed for Billy Miller, too!

There is no getting away from it – there are two highly desirable stars out there without a soap home – MM and Billy Miller bring them to GH!