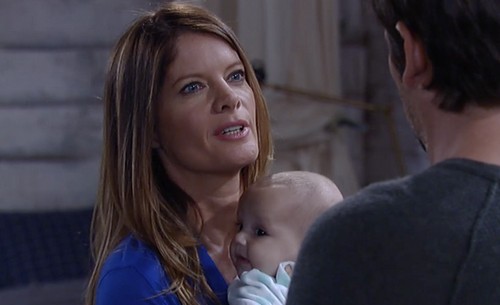 General Hospital spoilers for the week of December 15 reveal a slew of all new drama and exciting episodes on the ABC soap. According to GH spoilers, there will be some major revelations and shocking news revealed in the upcoming week. There is never a dull day in Port Charles, and rumor has it fans will not want to miss a single soapy episode.

Monday December 15: General Hospital spoilers for the episode airing on December 15 reveal that a DNA test will be done on Ava Jerome’s family and we will finally learn whether the father is Morgan or Sonny. Meanwhile, Dante brings his latest bunch of prisoners back to Port Charles and Carly Corinthos has a few words for her ex-fiance Franco.

Tuesday December 16: According to spoilers regarding the Tuesday episode of General Hospital, Maxie heads to court and learns the verdict in her custody hearing over baby Georgie. Meanwhile across town Olivia and Ned have a heart to heart and she opens up to him about her feelings.

Wednesday December 17: The December 17th episode of General Hospital teases a ton of drama for fans of the ABC soap. According to GH spoilers, Wednesday will be a day of forgiveness, or anyways a day of begging for forgiveness. Sabrina pays Ava a visit and apologizes for the trouble she caused the expectant mother, meanwhile across town

Thursday December 18: General Hospital spoilers tease that on the December 18th episode tensions will fly in Port Charles when Elizabeth confronts Sam and puts her in her place, she’s not exactly thrilled with Sam investigating her roomie Jake as if he is a criminal. The latest edition of Soap opera Digest reveals that on Thursday fans can also expect to see Julian Jerome receive some shocking news regarding the mob in Port Charles.

Friday December 19: On Friday’s episode of General Hospital fans can expect to learn the fate of Nina and Franco as they head to court to be sentenced for their latest crime spree. Meanwhile, Maxie receives some positive news about her visitation with Georgie, and across town Kiki comforts her ex Morgan as he copes with life-altering news.

So GH fans, do you think that Ava’s baby-daddy is Sonny or Morgan? Will Franco gets sent to Pentonville with Sonny? Do you think Sam will figure out that Jake is actually her husband Jason Morgan? Let us know what you think in the comments below and don’t forget to check CDL tomorrow for more General Hospital spoilers, polls and news.