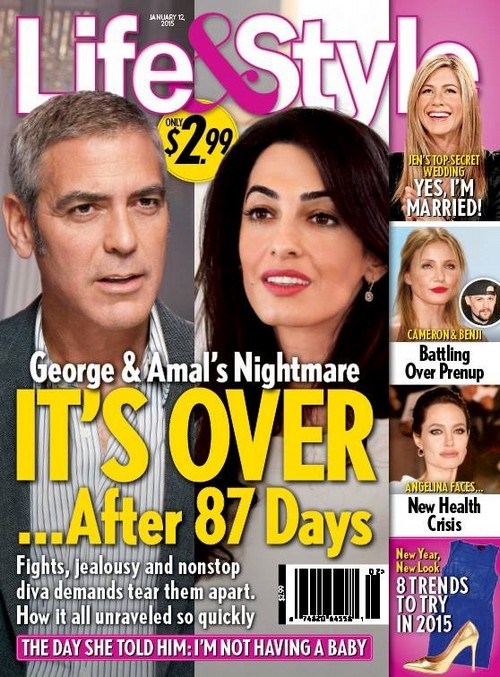 George has always been a lover of a certain type of woman. In the past, George dated women whose careers came secondary to his and were of the lesser variety in his eyes. Sarah Larson was a cocktail waitress, Elisabetta Canalis was a TV reporter and Stacy Keibler was a wrestler. George was a “love ’em and leave ’em” type of guy for so many years following his divorce from Talia Balsam that he’d claimed that he would never, ever get married ever again. It had gotten so bad that when one of his girlfriends even thought of the word “marriage”, he would bolt.

Then came Amal Alamuddin. Was she different? We may never know the answer to that one, but we can guess that she probably won George’s heart by standing up to him just once. He’s never dealt with that before and it got him all hot and bothered. We’re guessing that the minute Amal mentions that she wants babies, the divorce will be in full effect.

Fights, jealousy and diva demands are the root cause of the looming divorce and how it all unraveled for the actor and Amal. A source revealed, “She and George just aren’t going to make it. They’ve been fighting behind closed doors – and it’s looking like the world’s most famous bachelor should have stayed a bachelor. There’s no way the marriage is going to last.”

We’re guessing that George has been keeping busy hooking up with some cocktail waitresses and their ilk – just because that’s always been the type of guy George is. We’re honestly surprised that their marriage has lasted this long.

How long could George Clooney be expected to keep Amal Alamuddin around? She sounds like a horrid person to be around and now that she has secured his last name, things have just gone down hill from there.

George Clooney, his wife Amal Alamuddin and their friends, Cindy Crawford, Rande Gerber and their children Presley and Kaia relaxing on the beach in Cabo San Lucas, Mexico on December 22, 2014. The famous friends have decided to spend their Christmas holiday together by FameFlynet