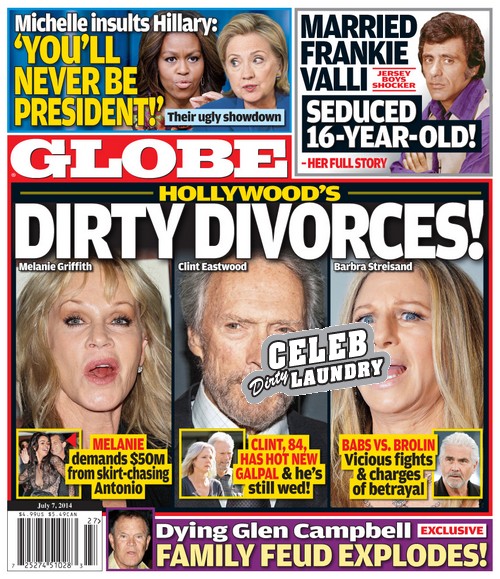 It has been less than a year since Clint Eastwood and Dina Riuz confirmed that they were divorcing but the 84-year old actor isn’t exactly putting his love life on hold. Clint recently moved new galpal Christina Sandera into the home that he once shared with Riuz. In order to get Sandera in the door he first had to kick out Erica Tomlinson Fisher, his first fling after his marriage ended. According to the July 7th print edition of GLOBE Magazine Clint doesn’t just date random chicks, he also likes to put a roof over their heads while posing as their personal ATM.

Clint isn’t the only aging celeb going through a bust up. Melanie Griffith finally got tired of Antonio Banderas’ skirt-chasing and decided to end her marriage to him. While the couple only has one child, Stella, who will be 18 in a few months so custody isn’t a huge issue, money will be. Mel reportedly is demanding a pay day of $50 million for putting up with years of Antonio’s bad behavior. According to the July 7th print edition of GLOBE Magazine Barbra Steisand and James Brolin’s marriage is on equally shaky ground. Apparently her meddling in grown son Jason Gould’s life combined with blatant hatred for James son, Josh Brolin has lead to some vicious fights, the kind that are really hard to bounce back from.

Was Frankie Valli involved with a minor? Well according to the latest issue of GLOBE Magazine he seduced a 16-year old girl many moons ago and that girl has grown up and recently came forward to spill all of the details. You’ll have to grab the latest copy to read more about that and also the feud within Glen Campbell’s family as the legendary star’s health declines. Although Campbell is near death it seems that those closest to him can’t put their drama aside until later on. GLOBE also addresses a showdown between Hillary Clinton and Michelle Obama – apparently Michelle insulted Hillary by telling her “You’ll never be President!”

In the meantime what are your thoughts on Clint Eastwood’s active social/love life? Do you think he loves Christina or is he just looking for company in his final years? As always GLOBE delivers plenty of punch and I’m looking forward to reading my copy this week. With GLOBE I know I’ll get right to heart of the news that matters to me!