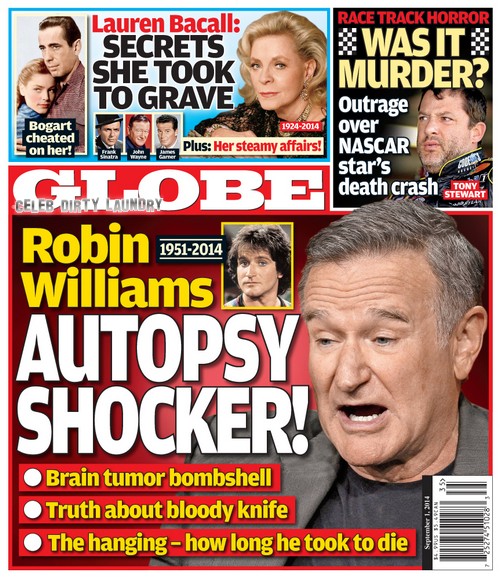 It has been about ten days since Robin Williams chose to take his own life, leaving fans to grieve the loss of a great actor and in the time that has passed new information continues to leak out. Whatever the circumstances ultimately prove to be the bottom line will remain the same – nearly every one of us was affected by a role of his and his abilities will be greatly missed.

According to the Sept. 1st print edition of GLOBE Magazine the autopsy that was performed within 24 hours of Robin’s suicide death revealed some grisly details in terms of how long it took for him to die. There is also some ongoing speculation about Robin’s health at the time of his death. Some outlets have reported that those close to him believed that he may have recently been diagnosed with cancer. In the weeks leading up to his death Robin lost at least 20 pounds and his depression had worsened. GLOBE takes it further with their intrepid reporting and their sources claim that the actor may have actually had a brain tumor at the time of his death and that it may have been the thing that made life seem impossible.

Also in the Sept. 1st print edition of GLOBE Magazine is an investigative piece on Tony Stewart’s crash that killed Kevin Ward, a young and aspiring racer. The issue quite simply is Stewart’s history. He is known to be a bit of a hot head and unfortunately that has caused some to wonder if he wasn’t as careful as he should have been because his anger had taken over instead. No one wants to say that Stewart intentionally killed Ward, but the insinuation has certainly been there even if unspoken.

No one dips into Hollywood like GLOBE Magazine does and so of course they have an exclusive on Lauren Bacall in the Sept. 1st print edition. The legendary actress died last week and of course she took secrets with her to her grave. Luckily for us GLOBE has the exclusive on exactly what these secrets were and they reveal them to us.

Grab the latest copy of GLOBE to learn all the details on Robin William’s autopsy – shocking revelations that won’t be made available elsewhere because of their sensitive nature. When we lose a monumental talent like Robin the tendency is to white-wash the event and treat those involved with kid gloves. At GLOBE they don’t bowdlerize – it is never an option because the leading news magazine is committed to full disclosure of all facts, details and evidence regardless of how shocking and potentially upsetting they might be. This is how news is meant to be reported and I’ll be rushing out to get my copy of this week’s Sept. 1 issue of GLOBE once I’m done at the office.