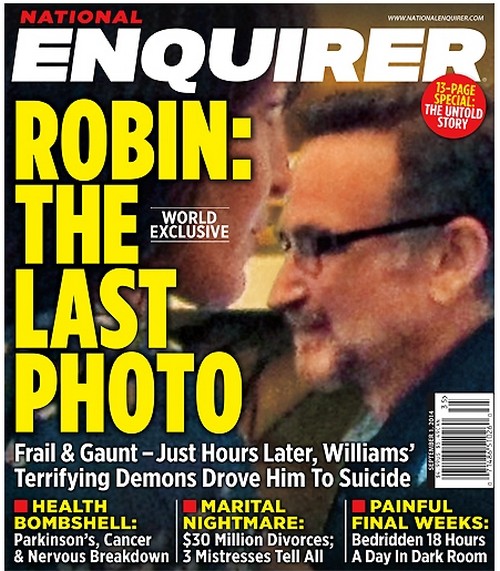 The death of Robin Williams may have taken an even sadder turn if recent reports of cancer are to be believed. While we already know that the legendary comic had been extremely depressed and was carrying his diagnosis of early Parkinson’s Disease very close to his chest, it seems that there was quite a bit more than that troubling him. We have already discussed how Robin William’s marriage to Susan Schneider appeared to be strained at best. The two were spotted out and about together but Robin apparently still felt very alone in the relationship.

According to the Sept. 1st print edition of The National Enquirer friends close to Robin also believed that he may have been diagnosed with cancer in recent months. “There were whispers he had cancer. He had lost about 20 pounds in recent weeks and in addition to the Parkinson’s, he must have felt like a death sentence had been placed upon him.” At one point Robin had actually said that he had nothing left to live for, leading a few close friends to realize that things were far worse for him than they had originally believed. This wasn’t a typical tumble from the wagon or the down side of his mania – both of which were plausible scenarios. These medical issues were unknown variables and they likely scared Robin terribly.

If he was battling cancer why do you think that Susan Schneider withheld that info when she had no problem telling us about Parkinson’s Disease? Did she pick and choose ailments or do you think that Robin was cancer free and the weight loss was directly related to the quality of his life and the depression that went with it? Tell us your thoughts in the comments below!