Robin Williams Suicide: Why Did Beloved Star Hang Himself? (PHOTO) 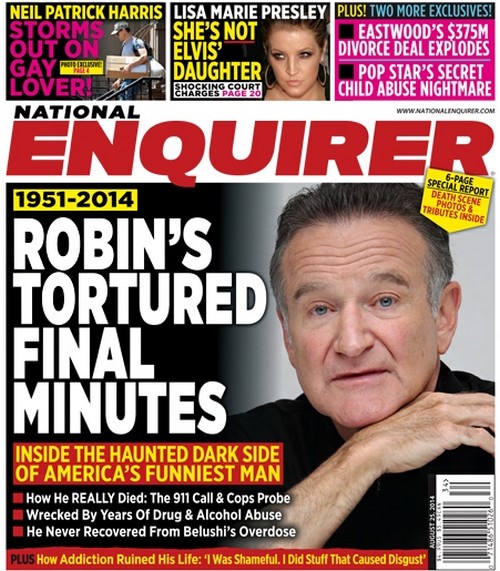 Tributes and tweets in honor of Robin Williams continue popping up online as we are also left to ponder what it was that ultimately caused him to hang himself rather than to seek significant help. He had been married to third wife, Susan Schneider for nearly three years and loved his three grown children dearly. According to the Aug. 25th print edition of The National Enquirer Robin’s financial situation had taken a serious toll on him.

While the actor was legendary in Hollywood – as much for his dramatic turn as for his comedic roles – he wasn’t in the best shape financially. Two divorces caused by his cheating affairs had seriously diminished his resources and at one point he had sold his mansion and estate in Napa just to become solvent again. Robin returned to prime time television last season in The Crazy Ones but it wasn’t because he fell in love with the job. It was more about needing to continue working just to maintain the expenses of his lifestyle. A source says that Robin resented having to work with a critical string like needing the cash being attached.

According to that same source Robin simply hanged himself to escape the mounting financial pressures.

Changing gears for a moment, do you think that Lisa Marie Presley might actually not be Elvis’ daughter? The new issue of The National Enquirer has done some investigative digging and is making a case for the bizarre possibility. We have also heard that Neil Patrick Harris’ romance with David Burtka has hit a serious snag with the actor storming out. You’ll have to grab the latrest issue of Enquirer to read more.

In the meantime, do you believe that financial worries alone are what pushed Robin Williams into a deep dark depression? Tell us in the comments below!