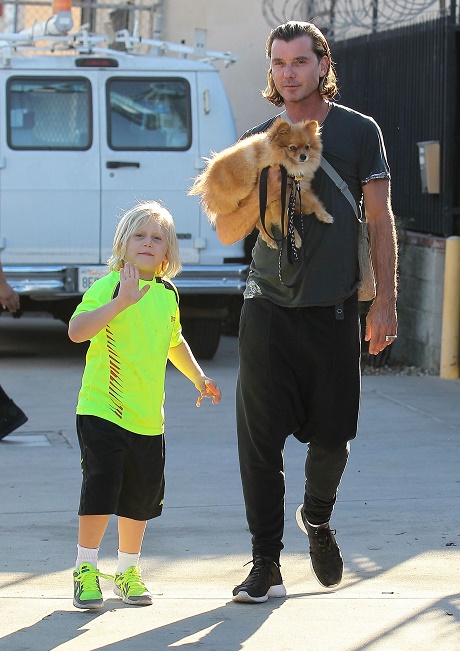 Is Gwen Stefani‘s husband, Gavin Rossdale, cheating on her with his transgender ex, Marilyn? The Voice coach Gwen Stefani and her hubby Gavin Rossdale have probably one of the most solid marriages in Hollywood…until now. The couple celebrated their 12th wedding anniversary last month and recently added another baby boy to their growing family. But, according to new reports, there may be some trouble in paradise for the Stefani-Rossdale clan.

The October 20th edition of Star Magazine reveals that Gwen and Gavin, “recently had a huge fight when the “No Doubt” singer realized that Gavin has been secretly communicating with his 1980’s transgender pop star ex Marilyn.” Apparently, Gavin slipped up and mentioned to Gwen that Marilyn offered the couple his “congratulations” after the birth of their third son, Apollo. Star’s inside source goes on to explain that, “Gwen couldn’t believe it. She was already embarrassed by their affair and she doesn’t understand why they still need to speak.”

For those of you who don’t remember, in 2010 publicly admitted to having an affair with Marilyn back when he was 17 years old, and his wife, Gwen, was mortified by his admission, especially after the press and media had a field day with it. While Gavin can’t exactly change the past, nor should he feel like he has to, you have to admit it is a little strange that he is still in contact with Marilyn.

Regardless of gender, the bottom line is that he is an ex, and it’s not usually appropriate to talk to your exes on a regular basis behind your wife’s back. Did you know about Gwen Stefani’s hubby’s transgender affair? Do you think that he should be allowed to talk to his ex? Or is Gwen right to be upset by it? Let us know what you think in the comments section below!