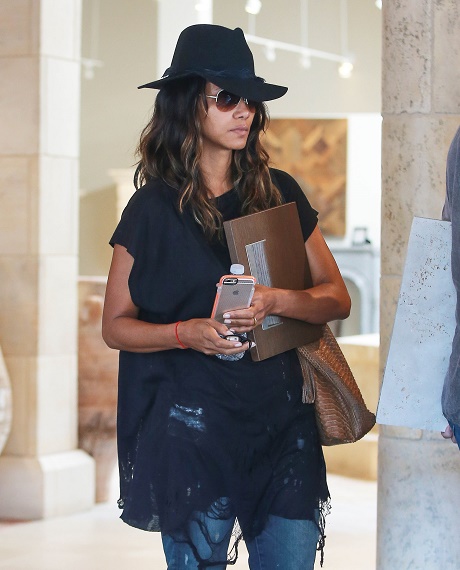 Halle Berry and Oliver Martinez are headed towards a divorce, it seems! Halle Berry likes her men clean cut and well groomed, and her husband Olivier Martinez always fit that description – until now. Rumors of a divorce have been flying around for almost a year, but these rumors have kicked into high gear after Olivier was spotted in Malibu sporting a ‘creepy mustache‘ and looking…well, sort of homeless.

An eyewitness source told the National Enquirer, “He looked a little strange. I find it hard to believe Halle would like the new look.” I mean, it is a stretch to assume that Halle Berry and Olivier Martinez are getting divorced because of a creepy mustache. A Halle Berry divorce situation wouldn’t arise out of such a superficial situation, but at the same time, she is very focused on her hubbys’ appearances.

Plus, Halle and Olivier have’t been spotted together since the birth of their baby boy, Maceo, last October. Halle did squash the divorce rumors for some time when she wore her wedding ring in public, but since she hasn’t been photographed recently, we can’t comment on whether she’s still doing that.

Sources close to the family have also been whispering that divorce is just around the corner. Since they were married last summer, neither Halle nor Olivier have been spending much time together. Halle reportedly sticks close to her Hollywood Hills home, whereas Olivier stays in Malibu home. The way the source explains, “They’re just delaying the inevitable split. It looks like Olivier will soon be history.”

Poor guy. Maybe he really should try shaving his creepy mustache, if only to prove to Halle that he’s willing to do anything for her. No? Too silly? What do you guys think?