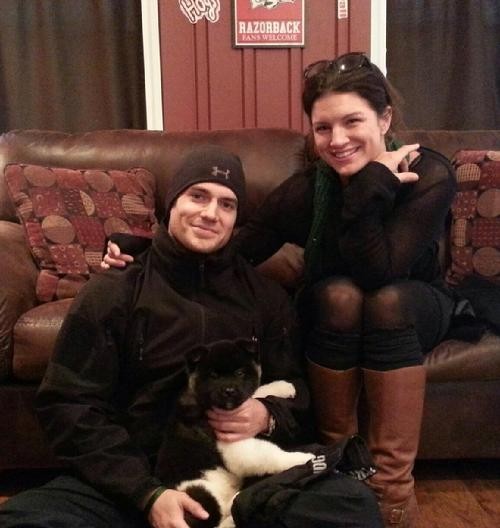 Henry Cavill and Gina Carano are still going strong, despite the blip in their relationship last year when Henry dated Kaley Cuoco. I’m surprised Gina took him back so quickly after that, which lends further credence to the theory that it was all one gigantic PR set-up to increase Henry’s fame in the US.

Either way, Henry and Gina went from being on again to off again to definitely on again. The couple has been dating for several years now, not counting those few months last year. Do we hear wedding bells in their future?

Henry has been very public about wanting a wife and children as he gets older, and while he certainly doesn’t have the time now – since he’s filming the Batman vs. Superman film pretty soon – he’s certainly been vocal about his desire to have kids soon. Does that mean there’s a ticking clock with his relationship to Gina?

I would say so, especially considering how much time they’re spending together lately. According to Page Six, Gina’s been spotted spending time with Henry while he’s been in Chicago, prepping to shoot the Man of Steel sequel later this year. They were spotted together at the Vertigo Sky Lounge this weekend, as well as the SushiSamba in the city.

According to sources, neither one of them was shy about posing with fans, and they weren’t being overtly secretive or hesitant about being out in public. Obviously, they don’t care if people know they’re dating, even though Henry still refuses to discuss his love life in public. Kind of hypocritical after the whole Kaley Cuoco situation, but I guess he’s holding his cards close to his chest. But if he and Gina were to get engaged, you think we’ll get a nice PR-sponsored outing with Gina flashing her ring? Or will she much more discrete than Kaley was?