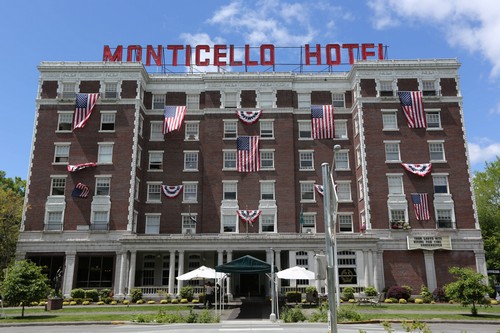 Hotel Hell returns to FOX tonight with an all new episode of season 2 called, “Monticello Hotel.” In this new episode, Ramsay checks into a New Mexico hotel that’s run by an owner who’s more interested in singing than in managing the property.

On the last episode, in the searing heat of New Mexico, Gordon Ramsay checked in to the Meson De Mesilla, a place that looked more like a penitentiary than a luxury boutique hotel. On arrival, he was asked to sign a waiver to promise he won’t damage the walls, and things go quickly downhill from there. He met the hotel’s owner, Cali Szczawinski, and soon discovered that she’s more interested in singing than managing the hotel – a lot more interested. In fact, she seemed to think she’s Cher. Ramsay wished he could turn back time, and reroute his flight to anywhere other than Las Cruces. Could he get this owner to focus more on running her hotel and keeping up his changes and less on her performances? Did you watch the last episode? If you missed it we have a full and detailed recap, right here for you.

On tonight’s episode, Gordon Ramsay checks into a historic building in Longview, WA, where the Hotel Monticello is celebrating its 90th anniversary. While picturesque from the outside, through the doors of the hotel lie a plethora of issues – the first being that owner Philip Lovingfoss is struggling to come to terms with his alcohol addiction. With the staff feeling neglected and underpaid, Ramsay needs to help Lovingfoss get back on track, both personally and professionally. With quite the task ahead of him, can Ramsay stage the intervention needed, or will this hotel close its doors just shy of its 90th anniversary?

RECAP: Gordon Ramsey is going to Longview Washington to help out the Monticello Hotel, Philip is the owner and has been there for years; his mother worked there since he was a kid. Philip was a bartender and married the owner who was 30 yeas older than him, his now girlfriend is older than he is as well. The employees are so pissed at the fact he shows of his wealth, they are super annoyed with him while they are not being paid much and the hotel is being neglected a lot. Philip is the biggest problem, he comes in drunk a lot and it’s embarrassing; Philip was charged with a DUI. Gordon arrives and loves the place, he’s also amazed at all the rooms the hotel has. Gordon sees all the cars outside, he sees the advertisement outside and it’s horrible in his opinion; he comes in and finds out how all the cars belong to the owner. Gordon is amazed that the employee of the month was done 3 years ago last, he was surprised to be brought over to the motel next door for a room. Gordon is amazed at how ugly the stuff in the rooms are in the hotel itself, he can’t believe it.

Gordon goes into a room and notices a bunch of crap laying everywhere, he is really annoyed how much is being stored in the hotel rooms. Gordon is so disappointed because his hopes were so high driving up.

Gordon goes to meet the owner of this place, he meets Ginger and Philip who own the place; Gordon is amazed at how the two are together. Gordon goes to the lounge and is told they are losing 400 grand a year, Gordon is told the employees are the biggest problem; Philip says he would feel sad about this hotel having to close. Gordon sees Debby the waitress and tells her his order, the chef is sad about cooking because the owners only buy cheap frozen stuff. Gordon is really disappointed by the food so far and can’t believe how much is frozen since Philip is pretty well off; Debby lets Gordon know the chef doesn’t choose the menu.

Debby brings the ravioli to Gordon, the pasta is packaged and he is so disappointed; saying the pasta is dreaful and can’t believe how bad the food is. Deby mentions how Philip drinks really bad and how he got a DUI, Gordon can’t belive that and Gordon is amazed he was never told that. Gordon calls out the chef, the chef says they are on a time restraint; he only gets 20 minutes a week to prep his food; Philip says he played the safe card and purchased most the food. Gordon tells Philip he needs to pay people to prep food, Gordon says he’s amazed at how the chefs are not being given the time they need or the pay they deserve.

Gordon then asks the owner Philip why he was arrested for drunk driving, Philip says he doesn’t know what’s going wrong and Gordon knows ho has been drinking today; Gordon is told about him having a drinking prblem and that he was reported for a DUI. His girlfriend Ginger says he does like his alcohol, Gordon asks Philip when he’s going to step up and if he can’t be honest with himself than they are screwed. Gordon is understanding that the problem of this place is the owner, they don’t even have room service, the guests are so disappointed that they are led to the motel; most of their guests are elderly when it comes to dinner service. Gordon talks to th ebartender about the drinks, the bartendrer mentions he drinks well over 10 drinks a day; Gordon goes over to Philip and asks about how he’s pretending to be part of this. Philip calls his staff liars saying that he doesn’t help, Gordon tells him to be honest with him because he is running it into the ground. Gordon takes Philip and the staff alone; the staff mention they are under service. Gordon asks Philip why he’s pretending, Debby mentions how Philip is either super giggly when drunk or just plain depressing threatening the staff he’d close the door.

Gordon is being told about Philips drinking so much and all the staff feel like they are being treated horribly, they want him to stay out of the bar and stop being so unprofessional.

Gordon lets Philip know that it’s all on him that the hotel is failing, he takes them all to go and visit a room upstairs; they put on some glasses and in the dark they see the stains on the bed. The staff was sickened with it, they all feel sick and gross about the messes on the diry bed and can’t believe people actually pay to sleep here. Gordon lets them know they are ripping people off and that they obviously don’t care about their staff and people staying there. Gordon says that Philip is amazed at how their staff put so much work and he’s so amazed at how little money the staff is being given for their work; Gordon is incredibly angered by the fact that the biggest problem is Ginger and Philip. Gordon asks Philip to stop lying to him and give him an answer, Gordon knows he’s got to stop being cruel to his staff; Philip gives him no proper answer and tells him to screw off.

Gordon goes to takes Philip and Ginger, introducing them to guests who have stayed at the hotel; people complained about how their rooms were so dirty. They all feel like they threw their money away for a horrible experience, Gordon is told none of them would ever come back in their life.

Gordon talks to Ginger on their own, Ginger knows that Philip’s alcohol problem is very deep; he doesn’t listen to anyone. Gordon knows Philip needs help and wil try to get him to get some sort of treatment to help his problem. Gordon gets the staff to help him to get Philip to see some help, all the staff mention how he needs help; Ginger knows that Philip has a horrible addiction, they believe Philip is going to kill someone or himself with his problem.

Gordon tells Philip he needs to get help, Philip says he’s not going to say a word; he calls the meeting to an end. Gordon goes to talk to Philip alone now, because if he doesn’t change and get help the hotel is going to die. Philip tells Gordon that he is willing to get help, he understands that his problems should be solved first.

Over night Gordon’s team gave the hotel a huge make over, they got rid of the motel sign and they can take a chance to go to either one they want; everyone absolutely loves the room. Gordon now brings them over to the room he stayed in, he completely made it look very luxurious and it’s now their best room; Gordon says there is a lot of potential here now. Gordon calls in their new room service, they all now try the dishes served and everyone loves it, Gordon reinvented the menu with local ingredients; the head chef is so happy with the fresh food. The guests are happy, it’s now time for Gordon to go; he says goodbye to everyone around. Gordon leaves and hopes that Philip keeps his promises, the hotel has had many more bookings since his visit; the staff is now being paid properly right now. Philip is booked into a program to help his drinking problems.