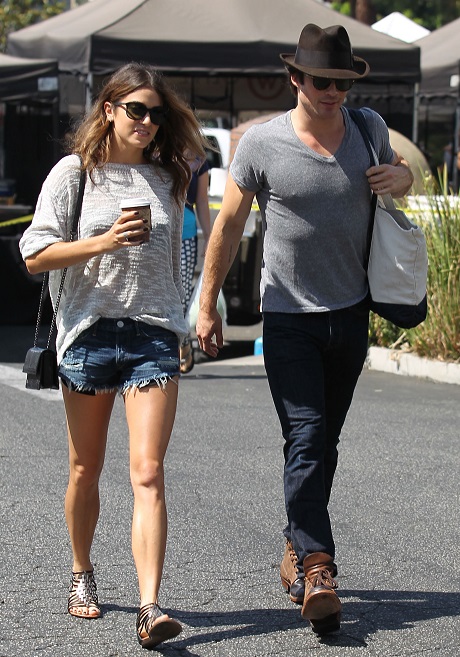 Things in Ian Somerhalder and Nikki Reed‘s relationship are heating up. They were recently spotted at a sex store in Toronto and spent over $1,000! Things in their shopping bag were vibrators, handcuffs, and restraints. An off-duty employee told TMZ that Somerhalder and Reed were at Seduction Love Boutique Sunday night and, while the employee recognized that he was in the presence of a movie stare, he mistakenly took Ian for Zac Efron. “You look like Zac Efron,” said the employee. Somerhalder laughed it off and said, “Nope, wrong guy.”

The kinky couple recently moved in together after only 3 weeks of dating. Sources say Nikki wanted to be close to her man because he is now back on The Vampire Diaries set working with ex Nina Dobrev. Nina and Ian dated for 3 years before splitting in May 2013. If my current boyfriend’s ex was as hot as Nina Dobrev, I would be worried also. Nikki reportedly goes to the set everyday.

Both seem to have moved on. Over the past few months, Nina has been linked to Miley Cyrus’ ex (Liam Hemsworth), Miranda Kerr’s ex (Orlando Bloom), and Derek Hough from Dancing With the Stars.

Fans of the hit CW show may still ship Damon and Elena, but various sources around the web say that Damon couldn’t be happier with his current life. The couple first began dating in July.

This isn’t the first relationship of Reed’s that moved quickly. In March 2011, she began dating American Idol contestant Paul McDonald. That June they were engaged and that October they were married. Dang, slow down girl! Reed filed for divorce this past May citing “irreconcilable differences.” What do you think about Nikki and Ian? They’re an adorable couple. Guess we’ll see how long this one lasts!