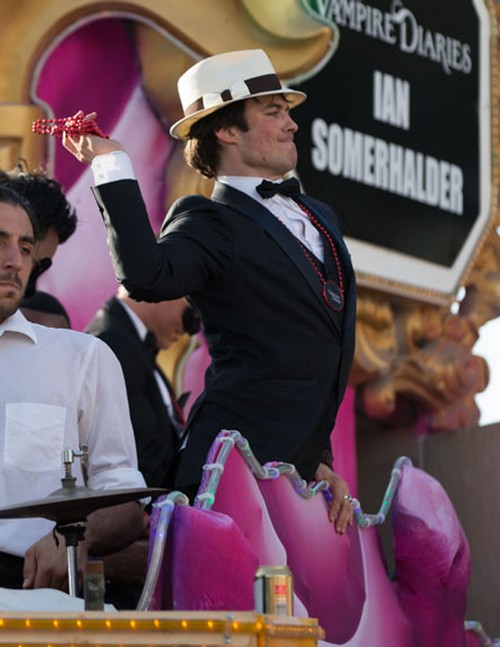 Nina Dobrev and Ian Somerhalder are no longer together, but the fact that both of them seemed to have entered new, high-profile relationships at the same time is too much of a coincidence to pass off. Nina is linked to her Vampire Diaries co-star Michael Trevino, and weeks later, there are very convincing reports of Ian dating his longtime friend and business partner, Molly Swenson.

Yes, Molly apparently has another boyfriend (doubt they are still together), and sure, she and Ian ‘holding hands’ at that party might have just been a friend thing. I still find it really odd that two friends would be holding hands in plain view of so many eyewitnesses, especially considering how rumors get spread in Hollywood – do you and your friends hold hands at parties? But anyway, I digress. Whether Ian actually has a new girlfriend is not the point, but rather the perception that he has a new girlfriend.

When E! report on something, it is often because they have a legitimate cause to report on it – i.e. they believe their sources are telling the truth, and usually, the publicists sign off on it as well. E!’s not in the business of alienating any major Hollywood bigwigs, and Ian’s publicist falls under that category. So if Ian is being publicly linked to Molly, Ian’s people probably Ok’d it. That means that whether he’s dating Molly or not, they wanted you to THINK that Ian was with her. Maybe damage control after all the Nina Dobrev stories?

We’ve been saying for so long that it seemed like Ian wanted to get back together with Nina, but Nina was holding out. Maybe Ian’s people realized that it made him look desperate, and decided that the public needed to see that he had moved on. But did it work? Well, Nina’s apparently jealous of Ian’s new girlfriend, so I guess it did. Don’t be surprised if she ends up ditching Michael Trevino [even if she wasn’t ‘dating’ him] to try to get back together with Ian. You know the saying – you never know how much you want something unless you’ve actually lost it? Well, that might apply here.