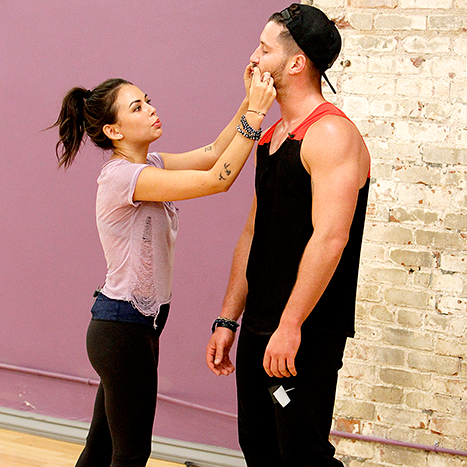 Janel Parrish and Val Chmerkovskiy have only known each for a few short weeks, but things are already heating up between the dancing partners. The duo are considered favorites to win the Mirror Ball trophy for this season 19’s Dancing with the Stars, but it’s more than their dancing that’s been getting the public’s attention. Janel and Val were caught kissing backstage, and Janel even told Val, “I love you.”

Now, they weren’t trying to be discreet about it, by any means. During the September 16th episode, of Dancing with the Stars Season 19 the audience got to see a few behind-the-scenes videos. Obviously, Janel and Val knew they were being filmed, but they carried along in their smooching session nonetheless. They first discussed Janel wanting better scores on DWTS, and then Val reassured her before kissing her. Their little chat ended with Janel telling Val that she loved him, which seems like a big commitment for a guy that she met a few weeks ago.

Now, Janel supposedly has a boyfriend, Payson Lewis, but how is he going to react after finding out about Janel’s flirting with Val on DWTS? Obviously, Janel and Val are playing up their relationship for the show’s sake, especially since they’ve made it very clear that they intend to win at any cost. And faking relationships is a tried-and-tested method of previous DWTS winners, and it’s bound to increase their audience favorite status.

Of course, her boyfriend could be completely accepting of Janel’s PDA with Val, especially if she’s made it clear that it’s only for the show. But that being said, expect a lot more where that came from – Val and Janel clearly aren’t shy about playing up their ‘romance’ for publicity purposes, and so far, we’ve only scratched the surface.