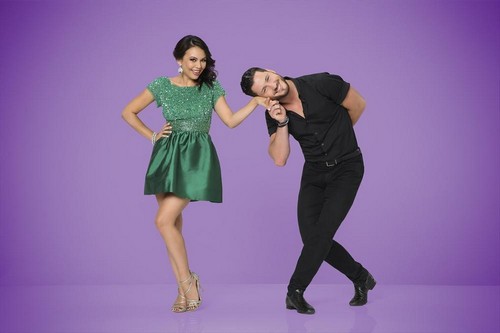 According to partners Jonathan Bennett and Allison Holker, the frontrunners for Season 19 of Dancing with the Stars Season 19 are Janel Parrish [from Pretty Little Liars] and Val Chmerkovskiy, brother to Season 18 winner Maksim Chmerkovskiy.

To be fair, DWTS clearly pairs their best dancers with the most promising celebrity dancers, and this season is no different. Janel Parrish already came in as a favorite thanks to her role in Pretty Little Liars, and has collected an ardent fan following in the process. Her Twitter and social media followers are a particularly vocal bunch, which means she has a slight advantage when it comes to winning the mirror ball trophy.

Plus, with Maksim out of the game for a while, it gives Val plenty of time to find his groove. Val and Maksim are already listed as massive audience favorites, so it’s understandable that their competitors would find them the biggest threat. But I also wouldn’t put it past the show to rig the winners, or at least, set it up in such a way that only the biggest fan favorites get to the end. This way, they win with ratings, and the fans get more involved in the show.

Of course, it’ll be some time yet before see the fruits of their labor. No doubt, dating rumors concerning Val and Janel are already starting to brew, which always happens with DWTS fan favorites.

Do you guys think Val and Janel will get to the last round? Will their passionate fans see them through? Will their dancing be up to par? Let us know your thoughts in the comments below.