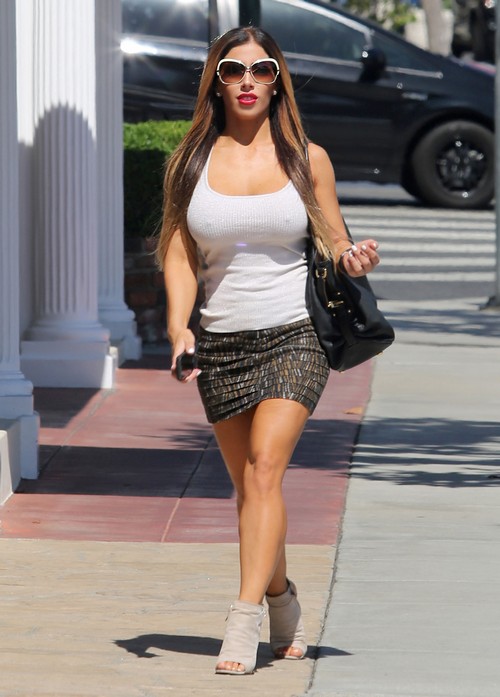 Jason Derulo cheated on Jordin Sparks with Carmen Ortega and has split with the broken-hearted singer. CDL reported on Jason’s cheating this week after the news of his break-up with Jordin and solo partying emerged. Now Media Take Out is reporting that model Carmen Ortega is the reason for the Jason Derulo-Jordin Sparks split, reporting that they’ve been seeing each other for months. If you don’t know who Carmen is, just Google her and you’ll know plenty about her in seconds. Ortega has pictures plastered all over the internet showing her voluptuous body in very tiny bikinis. She has also made a name for herself claiming to be the sometime side piece of two very well-known athletes, Reggie Bush (while dating Kim Kardashian) and LeBron James (while engaged to now-wife Savannah Brinson).

Back in 2013, Ortega gave an extremely candid interview to Bossip calling out Bush and James for lying about their current relationship status. There was one other liar, however, in her list of serial cheaters—and this one was not an athlete…it was Jason Derulo. You may recall Ortega and Derulo were pictured together last year and rumors began to spread he was seeing the curvy model behind his girlfriend of two years’ back. Derulo was able to keep the rumors at bay and we didn’t hear much more about Ortega….until now. While many fans are still wondering what could have broken this amazingly cute couple apart, Media Take Out is speculating that Ortega and Derulo were, in fact, still seeing each other. They shared the picture of the couple from last year, but note that the two were still seeing each other until Ortega found out the truth about how serious Derulo and Sparks were. The MTO source shared that after Ortega ended things, Derulo acted like a sick puppy dog, obsessively calling Ortega to beg for another chance.

In the 2013 Bossip interview, Ortega shares how all three men tried to woo her, reassuring her that their relationships were either “just for publicity” or just weren’t too serious. Ortega claimed Derulo told her he was not serious with Sparks. Ortega told Bossip, “I kept going back and forth asking him ‘Are you with Jordin or are you not with Jordin?’ One day he’s like “we’re back together” the next he’d say “we’re not together.” He acted like they were on and off. With Jason I asked him about an interview where he said he and Jordin were discussing marriage and he told me, ‘It’s not even like that, we’re not that serious. I was like ‘You’re going on interviews and saying certain things’ and he was saying, ‘It’s all fake it’s just press.’”  During the time of the interview with Bossip, however, she claimed she and Derulo did not have a sexual relationship, stating the two were simply good friends who had worked together in the studio.

Perhaps Derulo kept pursuing Ortega and the two did eventually enter into a sexual relationship that lasted until Ortega found out just how serious Derulo and Sparks were. MTO shared that Derulo was Sparks’ first love—he took her virginity. Despite Derulo dropping hints to Sparks about wanting to spread his wings, he could not break free from her and didn’t want to completely end their relationship. After his hit song, Talk Dirty to Me” made it big, he was looking for just that…something a little more dirty than innocent Sparks. Derulo began to see himself as a sex symbol and felt that Jordin was more goody-goody than naughty, taking his new sexy image into the wholesome zone, and he didn’t like that. Derulo tried to prevent breaking Sparks’ heart, but he’s been over the relationship for a while so it makes sense that he may have tricked Ortega into believing he and Sparks were not that close after all, finally persuading her to date him until he couldn’t give her any more of his time. MTO, in fact, shared that the reason Ortega and Derulo split was because he could not commit to her or give her all of his time. With the prospect of being a lifelong side piece ahead of her, she dumped him.

Carmen concluded the 2013 interview with Bossip with, “[Jordin] seems like a good person and a good girl and that’s why I want nothing to do with that situation anymore because I look at it like what a piece of isht of a guy to be doing that to her for so long. She is really in love with him – I feel bad about it. If I was in a room with Jordin, I would tell her straight up your man is not a good man for you. You are too good for him. I just feel like she’s being played really bad. Men in Hollywood, he’s not the only one, there’s a lot of them.”

So, did Derulo end his relationship with Sparks to prove to Ortega he is serious? Did he just use the rumors about a relationship with Ortega to provide the fuel he needed to burn his ex and finally get out of the relationship he’d grown tired of? Or, is Ortega leaking pics and information intentionally to get herself some press? Only time will tell, but we want to hear from you in the meantime! Tell us your thoughts below.