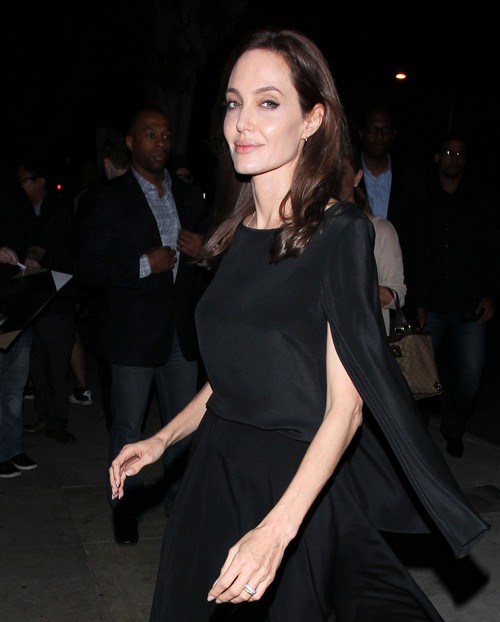 Jennifer Aniston and Angelina Jolie hate each more than any other pair of Hollywood stars and for years, ever since Angie stole Brad Pitt and destroyed Jennifer’s marriage, Angie seemed to be ‘winning.’ Until this week when a series of events has put Jen on top and subjected Angelina to public ridicule. Jennifer Aniston os gloatingand Angelina is burning.

Now, OK! Magazine claims that Jennifer reached out to Angelina via phone call to resolve their differences, whereas the National Enquirer claims Jennifer and Angelina want to have a curse-off with each other. In other words, they would both go on the air and spew curse words at each other on Jimmy Kimmel Live, and the proceeds from the event would go to charity. Uh-huh. Sure.

Jennifer Aniston and Angelina Jolie will have a curse off when we’re living on Saturn – so basically, never. Their feud is still going as strong as ever, they hate each other, even though all their moves and counter-moves are being done in secret now. Trust me, that’s as far as their relationship will ever go.

Update: Jennifer Aniston is dancing a victory dance and laughing in the faces of hated rivals Angelina Jolie and Brad Pitt! Today Angelina and her much touted “Unbroken” were snubbed by the Hollywood Foreign Press Association while Jen was nominated for a Golden Globe Best Actress award (BEST PERFORMANCE BY AN ACTRESS IN A MOTION PICTURE – DRAMA) for “Cake.”

Angelina Jolie and Jack O’Connell, with whom Angie is allegedly having an affair, show up for a screening of their SAG snubbed ‘Unbroken’ on Dec. 9 – courtesy FameFlynet