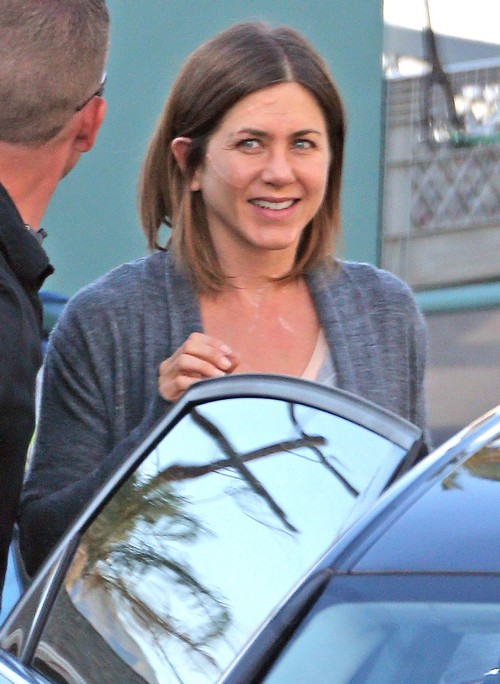 John Mayer and Jennifer Aniston ended their relationship a long time ago, but apparently John is having a little trouble letting go. Or maybe his relationship with Katy Perry opened his eyes to what a dick he’d been to all of his past girlfriends, and he wants to make it up to them by ruining their current relationships? Because that’s pretty much what I’m getting from these reports.

According to the tabloids, John Mayer is trying to make ‘amends‘ for being an asshole, and reportedly left Jennifer Aniston an apologetic voicemail. Um, he should probably try to put Taylor Swift at the top of his apology list, not Jennifer. Jennifer Aniston wasn’t the one who wrote a song calling him out for being a dick and then released it to the whole world.

Anyway, the voicemail apparently sparked a ‘few heartfelt conversations‘ between John and Jennifer, according to OK! Magazine’s sources. However, these sources also claim that that they’ve provoked Justin Theroux‘s anger. Uh-oh.

Apparently, Justin feels that since Jennifer and John ended years ago, that John should have thought twice before calling her now – especially when she’s in a seemingly committed and happy relationship. I mean, can you blame Justin, really? Who would want their fiance having ‘heartfelt conversations’ with her ex-boyfriend, especially that ex-boyfriend is a notorious womanizer.

Regardless, it looks like Jennifer and John have patched things up, although some sources are claiming that they’ve taken it one step further and hooked up. I have to say, I doubt Jennifer would cheat on Justin, but if she did decide to step out on her relationship, I think she’s smarter than to go back to John Mayer.

Jennifer Aniston on the set of ‘Cake’ in Sylmar, California on May 6, 2014. Jennifer was showing off the scars on her face that were put on by a make-up artist