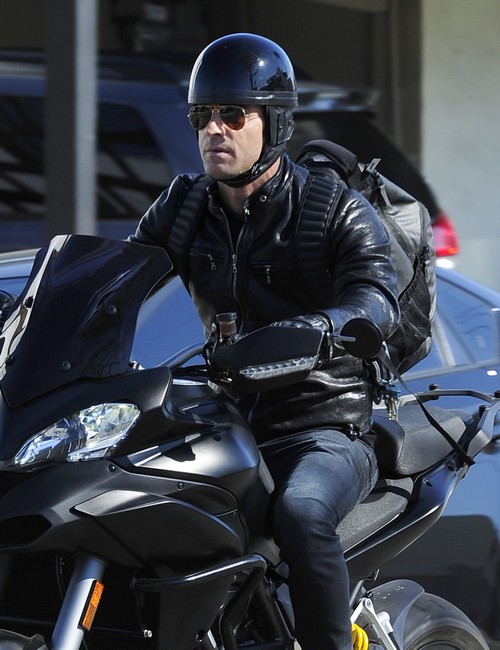 Justin Theroux parties when Jennifer Aniston is away? What, you don’t say!! In the most obvious news ever, recent reports suggest that Justin is getting his ‘flirt on’ while Jennifer spends her time across the country, filming her recent Oscar-bait film Cake.

A source explains that Justin was making the rounds during the premiere party in New York for Captain America: The Winter Soldier, adding, “He was being extremely friendly with a woman at the bar who was telling him all about her screenwriting. She asked if she could grab his a** — and he said, ‘Sure,’ and turned his butt toward her, and she gave it a grab!”

Um.. this is weirdly specific for a ‘source’ to be discussing, isn’t it? How did this person manage to overhear this conversation, if it ever happened? Were they creeping on Justin the entire night? And if it actually happened, wouldn’t it have made Page Six or US Weekly, not Life & Style Magazine?

Anyway, this ‘source’ also adds, “He was really enjoying the opportunity to blend in and have some fun with ‘regular’ people as opposed to secluding himself in the VIP area like he has to do when he’s out with Jen.” Oh yes, the movie star wants to mingle with the peasants. I’m so sure.

Justin Theroux is just as exclusive and high-profile as Jennifer Aniston – why do you think he started dating her in the first place? She raised his profile, and now he gets to hobnob with the elite all the time, as opposed to just some of the time. In addition to being an in-demand screenwriter, being Mr. Aniston has allowed him access to the upper echelons of the industry, as well as the celebrity A-list. There’s no way he’s blowing that by openly flirting with some ‘unknown’ at a crowded party with industry insiders everywhere.

Two different Justins: Justin alone on his bike doing his thing and Justin squiring Jen about