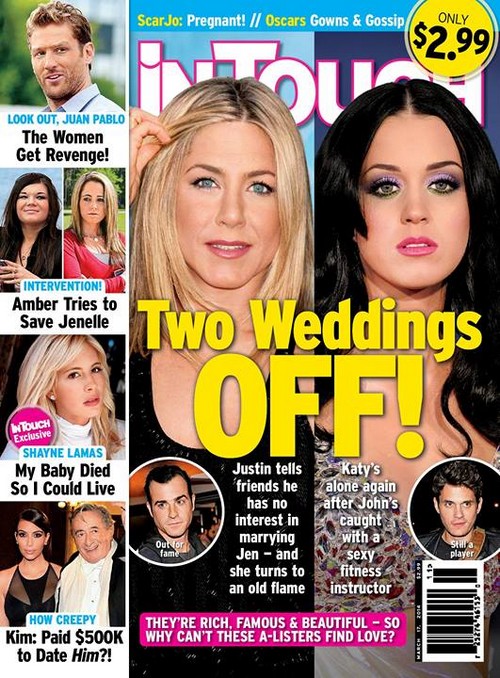 Doesn’t Jennifer Aniston get tired of trying to figure out what her marital status actually is? I mean, one week she’s pretending that the engagement is still on and then the next week it’s off and she isn’t spotted again with Justin Theroux for months. This is hardly a couple that is actually ever going to make it down the aisle, especially now that the wedding has been nixxed, again. According to the March 17th print edition of In Touch magazine Justin is telling everyone that a wedding is the furthest thing from his future plans. Furthermore, Jen is allegedly hooking up with an old flame! Also, Jen must finally be getting the idea that this guy is never going to go through with it because she was spotted getting cozy with an old flame!

Last week another couple confirmed that they had crashed and burned – Katy Perry and John Mayer. I think we all saw this one coming, right? They are chalking it up to busy and colliding schedules but you know as well as I do that John is never faithful to anyone so my guess is that there has to also be a third party in the mix.

Is Juan Pablo the worst bachelor ever? Well most of the woman that were in contention for the final rose seemed to think so. In Touch has the latest behind the scenes gossip on just how ugly that After The Final Rose special got once Juan Pablo had to face everyone one last time. Do you think he was really looking for love or is he just another player that had a candy store hand picked for him by ABC? Tell us your thoughts in the comments below!