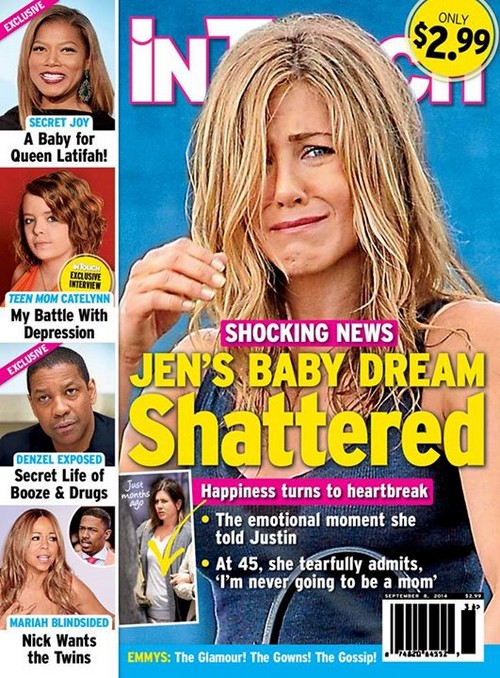 To hear the tabloids tell it, Jennifer Aniston is worthless until she has a child of her own to take care of. In the two years since getting engaged to Justin Theroux, the status of Jen’s stomach has been dished on almost weekly. Is Jennifer Aniston pregnant? Has she suffered a crushing miscarriage? Well, according to the Sept. 8th print edition of In Touch Weekly, it seems that the former Friends star has suffered another loss.

Sources say that Jen was pregnant but lost the baby and is now devastated to think about the possibility that she might not ever become a mother. What is interesting is the fact that Jennifer Aniston sat for an interview that aired just this morning that was in part about how much pressure the public has put on her to become a mother.

I can’t help but think that, at the age of 45, if Jen really wanted a baby, then she would have had one by now — one way or another. There are so many options and plenty of other celebs have taken advantage of them and chosen to become a single mother. Perhaps if a baby is what Jen most wanted, then she would already have one.

Will Nick Cannon go after custody of his twins once the expected divorce battle with Mariah Carey heats up? He reportedly thinks that they aren’t getting the best care possible while living with Mariah, and according to In Touch Weekly, he is planning on going after custody to keep their little lifestyles stable.

Has Denzel Washington been partying a bit too hard? Sources say that the actor has some real substance abuse issues that need to be addressed, but he prefers his secret lifestyle to getting real help. In Touch is obviously jam packed this week but what about Jennifer Aniston? Do you believe that the rumors of her being pregnant and suffering a miscarriage are simply that — rumors? Tell us in the comments below!