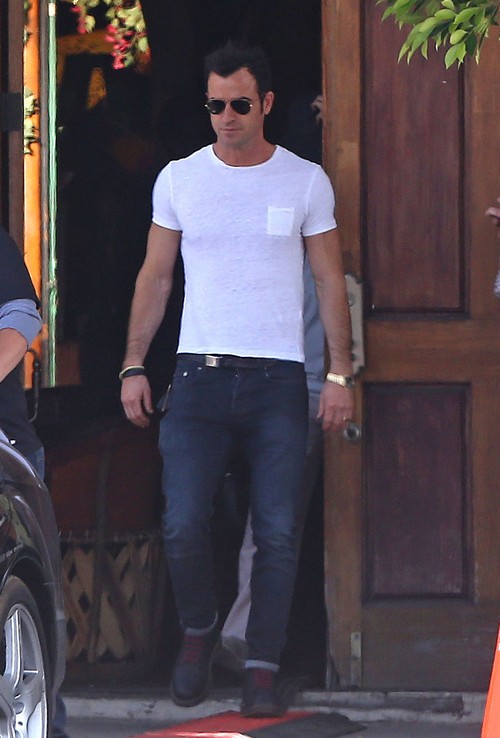 Oh, look what we have here: Justin Theroux partying without his missus. To be fair, Jennifer Aniston isn’t technically his ‘missus’ yet, but according to them, they’re still planning on getting married. Only in their world, it’s completely ok for their significant other to attend parties without them and flirt with other people.

Justin was spotted at HBO’s official Emmy afterparty at the Pacific Design Center in Hollywood on Monday night. He was sporting a massive ring on his finger, did NOT have Jennifer by his side, and was apparently in a great mood the entire night. He was reportedly dancing, flirting with some actresses, and basically having a ball of a time – all without Jennifer. And if you think we’re reading too much into her absence, US Weekly’s source also added, “It was weird that Jen didn’t come, because it seemed like Justin was having a great time catching up with friends.”

Keep in mind, this isn’t some random tabloid – if US is publishing this report, it’s because they got legitimate intel about the party. That means that someone close to Justin is revealing that everything might not be perfect in Jennifer-and-Justin land, which we’ve been suspecting for some time now. Weirdly, Justin covered his singles’ after-party fun by wearing a big ring on his left hand.

Of course, they’ve already tried their absolute best to get the breakup rumors shut down, and they’ve been making more public appearances together lately. Even then, it is surprising that Jennifer didn’t attend any of the Emmy events with Justin on Monday. Did she think that she was too good for the Emmys? Is she reserving herself for the Oscars? Or did she just not want to go with him?