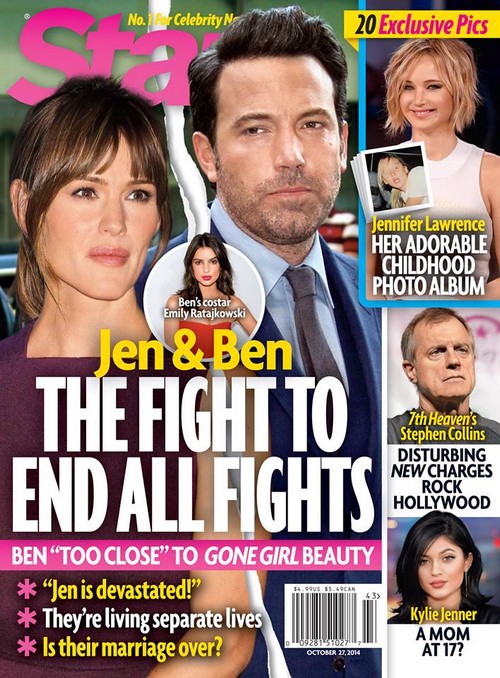 Gone Girl is making bank at the box office, and Ben Affleck’s A-list status is more assured than ever. However, what’s not as guaranteed is Ben’s family life, since Jennifer Garner is reportedly furious at Ben’s relationship with his Gone Girl co-star, Emily Ratajkowski.

Emily, of course, is famous for being the naked girl in Robin Thicke’s exploitative Blurred Lines video, so I can already see why Jennifer Garner might not have been enthused about her casting. Then, there’s also the fact that Ben literally hand-picked Emily for the job, knowing that he would have to get naked and have movie sex with her for the role. What a hardship for him, right? Working so hard and having fake sex with a model while his wife is at home, holding down the fort and taking care of his children.

Anyway, Star Magazine’s latest cover story suggests that Ben and Jennifer are now having furious fights over Ben’s inappropriate relationship with Emily. Since Ben got ‘too close‘ to Emily, Jennifer is apparently taking a stand and forcing them to live separate lives. Right. AS IF Jennifer Garner would risk everything she’s worked for to divorce Ben now, in the wake of all of his Hollywood success. As Ben’s wife, some of that Hollywood capital would rub over, and she knows that – and thus, there’s no way she’s leaving him. Now, Jennifer and Ben might fight over these things, and Jennifer might even kick Ben out every once in a while – but a Jennifer Garner/Ben Affleck divorce? Yeah, not happening.

Star also has several other featured stories, including one about Kylie Jenner becoming a mom at 17 years old. If Kylie is having a baby, I blame Kris Jenner’s pimp mama ways.