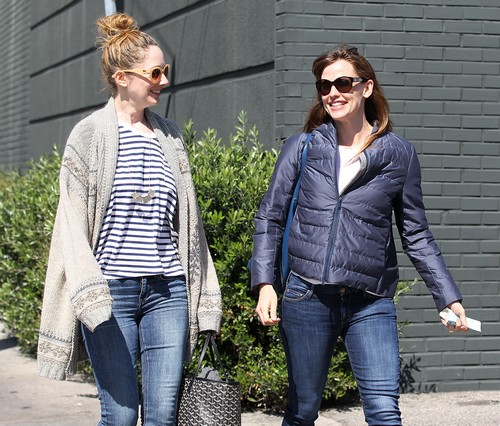 I guess Jennifer Garner‘s sick of getting pregnant, pushing out kids, and staying at home while Ben Affleck‘s career takes off. So it makes sense that Radar Online is reporting that Jennifer is refusing to have any more kids, and that she feels that three is more than enough.

A source tells Radar, “Jennifer told her pal that the difference between having two kids and three is ‘massive,’ and  said Sam would complete their family. In fact, Jen admits she and Ben had only planned on having two children, and Sam was a wonderful but genuinely true accident. They love their kids, but she’s really had her hands full with three since Sam was born in 2012 and while things are starting to settle down, it’s been pretty exhausting, especially with Ben being so busy.”

Well, they also have a toddler and two very young girls, so it’s no doubt exhausting to take care of everyone right now – especially with both of their careers. However, it certainly does seem like Ben’s getting the best of both worlds – spending time with his kids and having a great career – whereas Jennifer’s stuck at home more often than not. This is the time she should be capitalizing on her career after the success of Dallas Buyer’s Club, much as Ben did after Argo won an Oscar. After last year’s Oscar season, Ben landed David Fincher‘s Gone Girl and the new Batman role, plus got his name attached to what seemed like a million different projects. Jennifer, on the other hand, barely seems to have anything coming up, much less anything high-profile.

So you know what? We can’t blame her for wanting to take a break. Plus, they’re going to have their hands full for the conceivable future trying to take care of their three kids, and they probably don’t need to add to the brood.