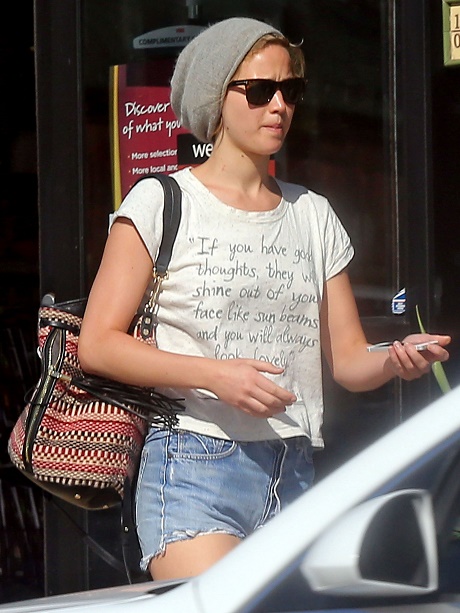 Jennifer Lawrence hates Kristen Stewart but they are ‘friends,’ but how long will their friendly relationship last if Kristen starts dating Jennifer’s ex-boyfriend, Nicholas Hoult? All we need to complete this ridiculous love pentagon is to have Kristen hook up with Chris Martin, and then we’ll have ourselves an insane, complicated Hollywood situation. Although, if we’re being honest, Jennifer Lawrence dating Chris Martin still continues to boggle our mind. Face it, Jennifer is tired of Chris Martin already.

I mean, I can totally see why Chris is dating Jennifer – she’s young, she’s pretty, she’s an Oscar winner, she’s fun – so basically, a younger version of Gwyneth Paltrow but one who actually likes eating real food and having fun. But I don’t know how Jennifer could go from dating Nicholas Hoult to dating Chris Martin. Putting aside the differences in age, Chris has an ex-wife that he’s still incredibly close to, and two children that are growing up fast. What, does Jennifer think that she can become a stepmother at her age?

Of course, Jennifer would have come to realize all this herself, and sources tell us that she has begun to get the creeping feeling that she made a mistake. The biggest reason for her feeling this way? Chris Martin’s co-dependent relationship with his ex-wife, Gwyneth Paltrow. Chris even hosted Goopy’s birthday party! I don’t care what other people say, both Chris Martin and Gwyneth Paltrow would be better off getting back together, especially for the sake of their children. So, really, can you blame Jennifer Lawrence for being insecure about how much time Chris spends with Gwyneth?

Also, whenever Jennifer Lawrence and Nicholas Hoult broke up in the past, it was always with the intention of getting back together in the future. However, this time, Nick’s supposedly moved on to Kristen Stewart. Last time, Jennifer and Nick broke up, he waited – even though it was just a farce for Jennifer to win her Oscar. But this time? Well, he’s over it, man. He’s busy with his career, he’s probably happy not to be second fiddle to Jennifer anymore, and he’s with the laid-back and hipster punk Kristen Stewart – someone who doesn’t give a crap about Oscars or labels or anything of that sort. And Jennifer may hate Kristen for it, but it’s too late for second thoughts.