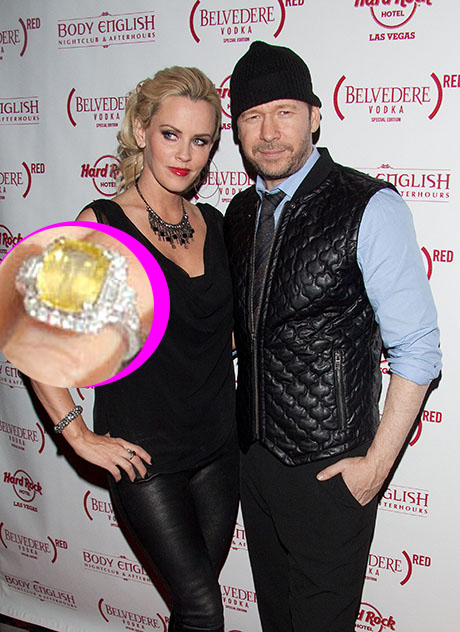 Jenny McCarthy and Donnie Wahlberg are engaged! The couple announced the news on Wednesday’s The View  and, in usual Jenny fashion, she couldn’t contain her enthusiasm. While gushing to her cohost gal pals, she showed off her giant yellow sapphire engagement ring to the crowd and the panel. She then went on to give details about how the proposal went down, and just how crucial her son Evan was to the surprise popping-of-the-big-question.

This will be the second marriage for both stars and both are coming to the marriage with children of their own. Donnie had two children with his ex, Kim Fey, and Jennie of course had her son, Evan, while in a past relationship with John Mallory Asher. Perhaps McCarthy’s highest profile relationship was when she was with comedian Jim Carrey.

Last November she spoke about the attitude she sported while trying to find love after her tough breakup with Carrey. “I told the universe I’m ready for love. I said bring the one. I’m not doing any more auditions.” And, in talking to Bethenny Frankel, she spoke on the topic of her relationship with Donnie: “I think he would be an amazing husband! So, if he does [propose] yea, I would sure say yes. I wouldn’t be surprised if I was the one proposing!”

Well, looks like she got her wish! Now all we have to do is wait for the wedding date to be set! I’m sure the occasion will be heavily documented on The View because, well, they like that sort of thing.