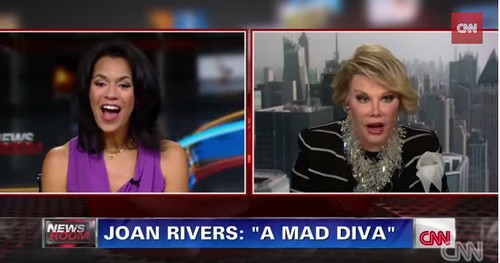 We just can’t get enough of Joan Rivers. The controversial mad bat is leaving an unflattering path of destruction in her wake since the release of her acidic new book, “Diary of a Mad Diva”. Rivers’ current promotional book tour is more controversial than Nick Nolte on a meth binge in Tibet. She had an extremely volatile run-in with PETA last Tuesday:

She was promoting her book at Barnes and Noble when one of PETA’s people asked her why she insisted on wearing fur. She replied, “You’re absolutely right. I’m totally on your side.” Then Rivers went nuclear. An inaudible negative comment was met with: “Oh shut up! You don’t know what the f**k you’re talking about!” She went into a tirade about the old furs in her cellar and indirectly stated that she isn’t interested in buying new furs.

But the fun didn’t stop there.

Controversial celebrities, politicians and extremists don’t like being called out live on air. These confrontations are similar to attending Gary Busey’s birthday party in Chernobyl (torn earpieces, smashed cameras, broken chairs and a Donald Trump cake) Therefore it was only natural that Rivers’ latest husky-voice bitch session occurred during an interview with CNN anchor Fredricka Whitfield.

The CNN interview turned sour when Whitfield asked, “Well, what about when it is about something that really, you know, does seem off-limits to a lot of people. I mean even in your book you joke about Casey Anthony’s baby, Princess Diana ‘surviving so many landmines’ and who she dated. I mean, do you feel like there are boundaries ever?”

After a slight awkward tête-à-tête between the two, Rivers screamed, “You know what? I’m going. I’m really going because all you’ve done is negative. I’ve made people laugh for 50 years. I was put on Earth to make people laugh and my book is funny […] Stop it with ‘you do this’ and ‘you’re mean! You’re not the one to interview a person who does humour! Sorry!”

She pulled out her earpiece and stormed off.

A half-smiling-half-dying-inside Whitfield responded, “Are we serious?”

Yes, Whitfield. Yes, we are.