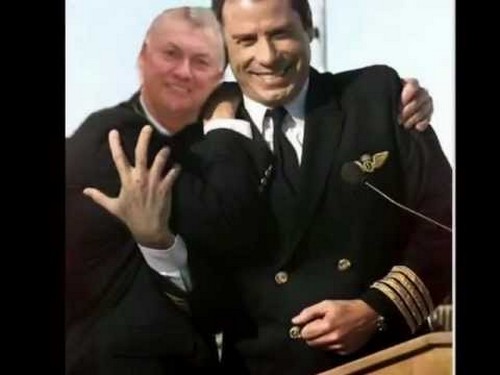 In 1981, John Travolta was the hunk with the junk in the white-pant-trunk, and it wasn’t an asthma pump. The shoulder-pad generation swooned over his dimpled chin and sexy-blue-eyes. He was the hottest hot person in the history of hot people, and then he went and spoiled it all by having a facelift and an awkward affair with a man named Doug Gotterba.  Travolta interviewed Dougie for a pilot job, because Dougie needed a job and Travolta needed a man. The job led to another job (ohgawdwhy!) in a hotel room in California. The rest is history. Or is it? Of course not! History became Doug’s story.

And The National Enquirer’s.

“I’d stay in the room next to John in luxury hotels. Sometimes he’d bring women along as beards. But he would ask me to join him in his suite and we’d spend the nights together. It was our little secret,” explained Gotterba.

Their love affair ended six years later. Sad right? No. Not sad. Absurd, yes. Not sad. Why, oh why did they break up? Well, Gotterba couldn’t handle Travolta’s – wait for it – sex drive anymore!  “John was oversexed, and I knew that he had many other lovers on the side. Some of them I’d hear about, others he told me about himself. John demanded that I come to his house at all hours of the day and night [for sex].”

What- Huh? Wait… Did he just say John was “oversexed”? Who says that…? Where do these people come from?! It’s like a Nicki Minaj song!

The 60-year-old Scientologist was found in a closet yesterday – he refused to come out.

What do you think? Is Gotterba lying? Is Travolta gay? What does “oversexed” mean? Let us know your valuable thoughts in the comments below.