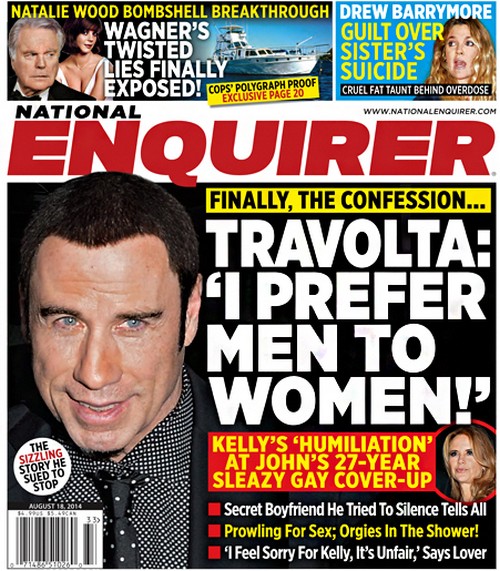 I have to say I don’t really understand why John Travolta doesn’t just live an honest life. I mean, when several men from all walks of life tell the exactly same story about the actors’ gay proclivities, there has to be something to it, right? Where there is smoke there is usually fire and John’s former pilot, Doug Gotterba is determined to fan the flames with a new tell-all. John recently lost a court battle to silence Doug and now the pilot is ready to spill the details on his 6 year tryst with the married actor.

While Gotterba is dishing all the details he also claims to feel sorry for Kelly- who he believes to be a nice woman. Doug wonders why Kelly has stayed in the marriage for so long, while knowing that John is allegedly a total slut.

Also in the new issue of The National Enquirer is a close look at the relationship of Drew Barrymore and her step-sister-Jessica who was found dead in a car last week surrounded by pills. Apparently tensions had been strained between them for quite some time and now Drew is beating herself up over not mending the relationship. Old Hollywood fans have long been obsessed with Natalie Wood’s death while spending time at sea with Robert Wagner and now some new details have emerged that are raising eyebrows. You’ll want to grab the latest Enquirer but in the meantime, why do you think that Gotterba has waited until now to spill the beans – oh yes, it’s because a judge finally quashed John’s desperate attempts to silence him! Tell us in the comments below!