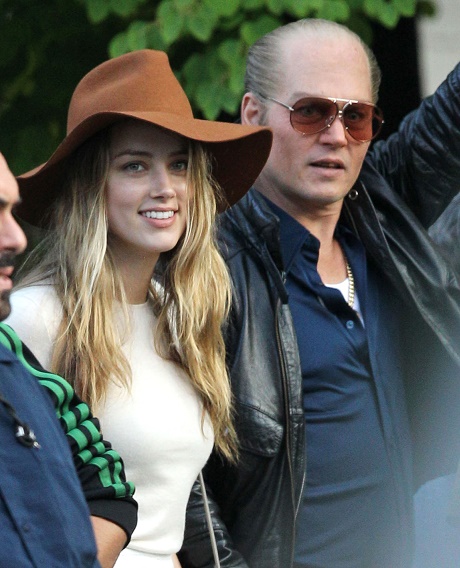 In case you were thinking that everything is going smoothly in Johnny Depp‘s personal life, then you would be absolutely wrong. The star instead is finding himself trapped between the two most important women in his life — current fiancee, Amber Heard, and ex fiance, Vanessa Paradis. While his split from Vanessa a few years ago seemed to go as smoothly as these things can, especially when kids are involved, there have been recent issues that have really pissed his ex off.

According to the Sept. 15th print edition of Globe Magazine, Johnny is planning on marrying Amber this coming December and since he feels incredibly secure in their relationship, he sees absolutely no need for a prenuptial agreement. When he shared this with Vanessa Paradis she totally freaked out because there is $350 million at stake and she wants to be sure that their two children get a fair inheritance. If Johnny and Amber have children and no prenup is in place, then Vanessa fears that the younger starlet will try to cash in on the off chance that the marriage doesn’t work out.

What’s interesting is that when Johnny Depp shared Vanessa’s concerns with Amber she also flipped out. Apparently, Amber Heard believes that Johnny’s ex needs to butt out of their private lives and she doesn’t understand why he even listens to her advice. The thing is, Johnny Depp does still value Vanessa Paradis’ opinion and now he is wondering why Amber is so worried about signing a prenup if money isn’t really her motive. Do you think Amber is really more about a pay day then she is about being happily married to Johnny? Tell us your thoughts in the comments below!