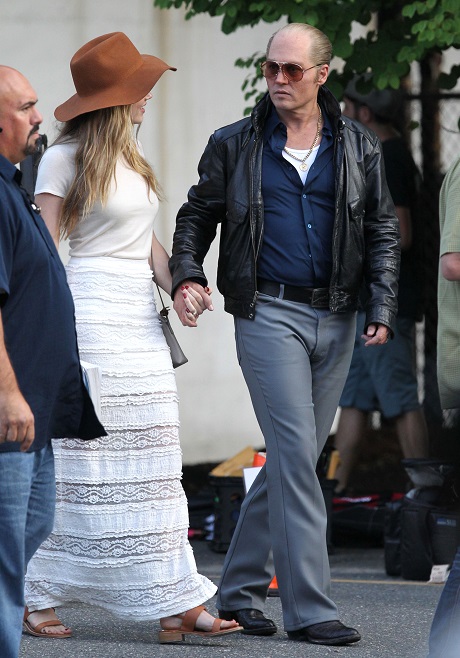 The media makes it sound like Amber Heard managed to pull Johnny Depp out of his mid-life crisis, but Johnny’s clearly still in a funk. His partying and drinking apparently hasn’t reduced at all, even though he’s now doing a better job of cleaning up after himself. But sources say that Amber is mostly oblivious to Johnny’s other side, thinking that he left behind that lifestyle after they got engaged.

Boy, is she in for a rude surprise when she finds out, which is also bound to happen eventually. A source tells Radar Online, “Johnny was so wild for so long and it’s hard to believe that Amber has straightened him out completely…People are afraid that he’s just stopped partying or is hiding his partying to be a good and upstanding guy for Amber..”

Ugh, these reports diss Johnny’s ex Vanessa Paradis so hard, it’s ridiculous. The narrative that they’re giving us is that Johnny was so miserable and unhappy with Vanessa that he was ‘wild’ for a very long time, and partied with other women non-stop. And then, Amber came into his life and made it all dandy.

Unfortunately, that’s not how this works. Johnny was the image of a perfect partner when he was with Vanessa, but he only turned to alcohol and partying after they broke up. But even then, substance abuse never became a problem for him, even though the same thing can’t be said of his career. But Johnny honestly does seem devoted to Amber [for reasons I can’t really comprehend], so I don’t think he’s going to be partying and hitting on other women even when he has the opportunity.