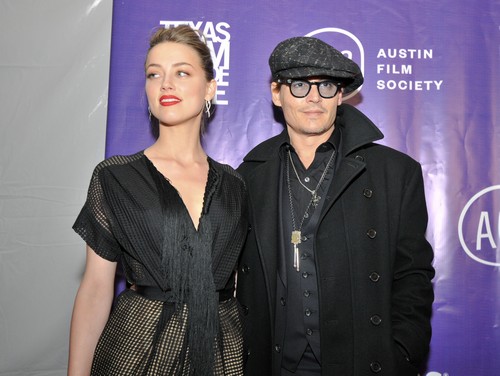 Johnny Depp‘s engagement to Amber Heard certainly came as a surprise to many people, considering that he never proposed to his longtime partner Vanessa Paradis. Since Johnny and Vanessa were together for more than a decade and have two children together, I’m guessing Amber either has magical lady bits or Johnny’s just desperate to settle down.

However, a new report from Star Magazine claims that Johnny’s already cheating on Amber, even though it’s been less than a year since the two have been formally engaged. Really though, is this all that surprising? There was a very apparent overlap between Johnny’s relationship with Vanessa and Johnny’s relationship with Amber, and you know what they say – once a cheater, always a cheater, especially in Hollywood.

We can’t claim to know the intimate details of Johnny’s relationship with Amber, but the tabloids have been suggesting that it’s not all happy-go-lucky recently. Apparently, Amber has been really insecure in the relationship because she thinks she’s going to get dumped as soon as Johnny finds someone better. Her career has faltered and stalled in the last three years, and she hasn’t booked a significant role since getting together with Johnny, something which probably surprised both of them. See, connections aren’t everything – you need a modicum of talent as well.

Either way, Johnny’s still on the A-list, and Amber’s probably straddling B/C. So sure, Johnny could probably do a lot better, career-wise. But if we were to guess, we’d say that Johnny’s still going through his mid-life crisis and doesn’t know what he wants. He thinks he wants to be married to Amber Heard right now, but he might change his mind and decide that he wants to play the field instead. And as we stated already, Amber shouldn’t be shocked to find out that Johnny’s been cheating on her [if he has actually been cheating on her] considering how they got together.