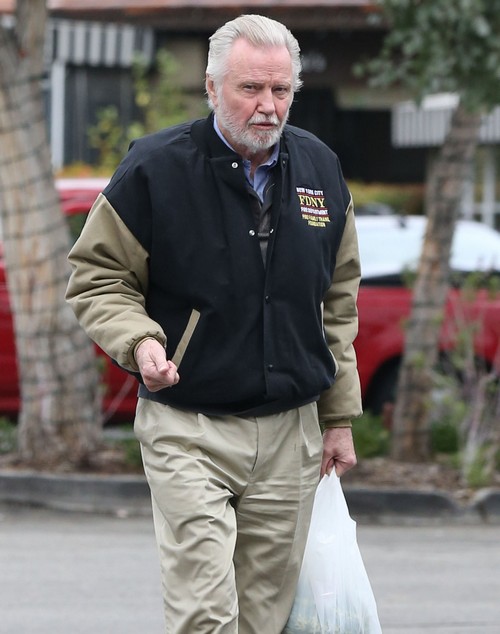 Angelina Jolie and Brad Pitt got married over the weekend, and Angelina Jolie’s father, Jon Voight, wasn’t invited. While everybody else was preoccupied with the VMA Awards and the Emmy Awards, Brad and Angelina got their marriage license in California, and went with a small group of friends and family to Chateau Miraval in France, where they proceeded to tie the knot – ten years and six children after they met.

However, we suspected that Jon Voight wasn’t at the wedding when it was reported that Maddox and Pax walked their mother down the aisle. Since that job is usually reserved for the father of the bride, that got us curious about Jon’s presence at the wedding. And then, we know that he was at the Emmy Awards on Sunday, and since the wedding reportedly took place on Saturday in another country, it would have been difficult for him to fly back and forth without arousing any suspicion.

But is that why he wasn’t at the wedding? Or was he just not invited? When Jon was told that Angelina and Brad got married by Inside Edition, his response was, “That’s nice.” He’s acting like he didn’t know it was going to happen, which means he probably wasn’t invited. Ouch.

Angelina and her father seemed like they were working on repairing the rift between them over the past few years, but Angelina probably knew that if she invited her father, the news would have leaked. She and Brad seemed intent on getting married without any publicity or media fan fare, and they wouldn’t have been able to do that if Jon opened his big mouth and blabbed to the media. As we know from his past interviews, he’s not very good at keeping secrets or maintaining privacy – especially when it comes to his daughter’s family.

Of course, I’m guessing Jon’s going to be bitter for some time. It’s not every day that your daughter gets married, and if he wasn’t even invited…. well, let’s just say that Angelina’s got some explaining to do when she finally talks to her father.