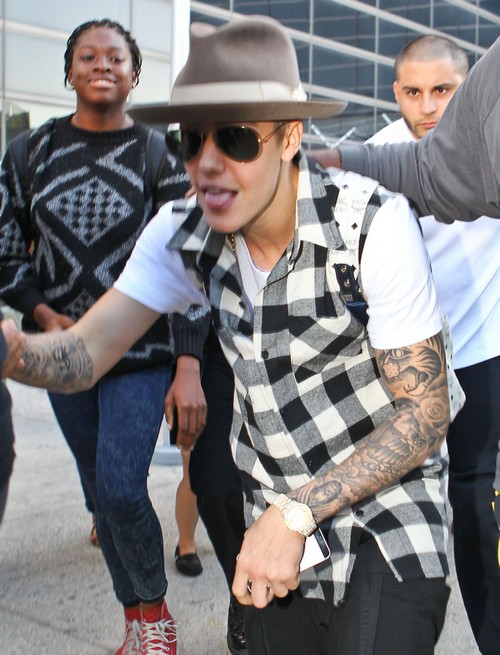 Was Justin Bieber just using Kylie Jenner to get to her sisters? Justin was spotted having dinner with Kendall Jenner at Nobu in Manhattan on Monday, but it wasn’t even a week ago that he was rumored to be flirting and hooking up with Kylie Jenner. Is he really switching hookups that quickly? Well, I suppose he did ‘have dinner’ with Kylie while he was still with Selena Gomez, so maybe he’s used to all his relationships overlapping. Or maybe he just doesn’t care.

Regardless, this dinner definitely brings about a different dynamic in the Justin- Selena – Jenner/Kardashian mess. Selena’s cut off all ties with the Jenner sisters, but sources have been saying that she’s thinking of reconciling with Justin. However, it doesn’t look like he’s even interested in a reconciliation, if all these ‘dinners’ are any indication. Really, I would say that his actions make it seem like he’s just trying to hook up with all the Kardashians before the end of this year. He’s already gone through Kylie and Kendall, so who’s next? Khloe Kardashian? Kim Kardashian?

And before you say that Khloe and Kim are too old for him, think again. Justin’s a pro at flirting with older [and married] women – remember the Miranda Kerr debacle from last year? And the fact that they’re taken shouldn’t bother him either. Justin’s conscience barely exists any more, and I think his priorities in life have shifted so drastically that all he cares about is partying and hooking up with famous and/or attractive women. I wouldn’t necessarily consider the Kardashians on his level – after all, Justin actually did become initially famous off his talent – but I don’t think he’s being that picky.