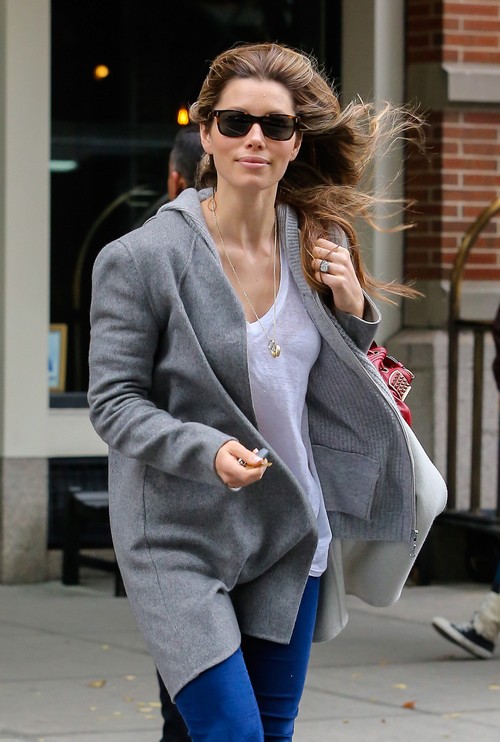 According to a new report from OK! Magazine, Jessica Biel doesn’t even trust hubby Justin Timberlake enough to let him go on tour alone. Apparently, Jessica has surprised Justin by letting him know that she’ll be following him on his tour, and that she’s freed up her schedule so she’s able to do so.

Um, what schedule? She has absolutely nothing going on – no movies, no promotion, and nothing in the works. And unless she is pregnant, then she doesn’t really have much else to do apart from following Justin on tour.

Anyway, OK!’s source explains, “Justin was in shock when Jessica surprised him with the news. Being apart from your spouse for weeks or months at a time isn’t healthy in Jessica’s eyes. She fears she and Justin will grow apart. Jessica is well aware that women throw themselves at Justin when he’s on tour. The temptation is there, and that makes her very uncomfortable.”

This is hilarious. I love how this report pretends as though Justin hasn’t strayed in the past, even if it’s not common knowledge. Olivia Munn, anyone? Jessica knows very well that Justin can’t control himself, and it’s not shocking that she would want to accompany him on tour. You’d think that marriage and a steady relationship might have made him a more reliable husband, but apparently, not so much. And unfortunately for Justin, Jessica tagging along means that he won’t be free to flirt around with random women.

What do you guys think? Will Jessica actually accompany Justin on his tour? She’s done it in the past, so it won’t be completely out of the ordinary if she does it again. Let us know your thoughts in the comments below.