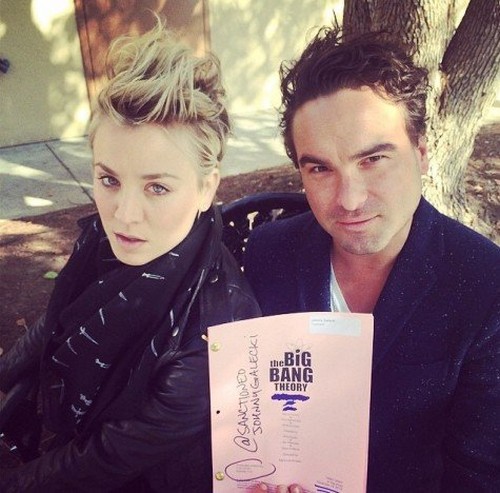 Though the marriage between Kaley Cuoco and Ryan Sweeting is still very new, alcohol, jealousy, erratic behavior, and resentment are the words that best describe a day in the life of the troubled couple for whom divorce rumors abound. As CDL reported earlier this month, Kaley and Ryan have been fighting more and more and tensions are high. Now that Kaley Cuoco is posting selfies of her and ex-lover Johnny Galecki we can safely assume her marriage to Ryan Sweeting is done.

Friends of the couple are whispering that their dysfunctional marriage is about to crumble into divorce because of their bad behaviors and vicious cycle of tit-for-tat. Kaley is the jealous type and is very needy in relationships. Ryan played along in the beginning but between Kaley’s inflated ego and his insecurities, he is beginning to rebel. Ryan gets upset that Kaley expects Ryan to be around constantly, and she gets upset when he chooses to go out with friends instead of her. She drinks to drown her sorrows, but always ends up screaming at him, then later crying as she apologizes for getting upset. Ryan cannot take the erratic behavior. It has gotten to the point where Ryan doesn’t even go out anymore because he doesn’t want to deal with the drama.

After a big fight, the two sat down in an attempt to make nice and clear the air. At the time, Kaley tried to pull some psychology on Ryan and told him she didn’t mind him going out and partying with his buddies, but that he has to be prepared for her to do the same, leaving him at home while she has a “girls’ night out” every so often. Kaley thought that would scare Ryan, but it didn’t. Now, Kaley is resorting to immature tactics, trying to make Ryan jealous by taking selfies with ex-love and current co-star on The Big Bang Theory, Johnny Galecki. The selfie shows the former lovers sitting very closely together, both with seductive looks on their face. The pic was captioned, “Mr. Galecki is in full control.” Probably not something hubby Ryan would be happy about.

Kaley has always tried to reassure Ryan he has nothing to worry about, but when she is upset with him or trying to make him jealous, she’s not above this passive-aggressive behavior.

Okay CDLers…give us your best guess about how any more months this marriage has before it implodes. Tell us below!