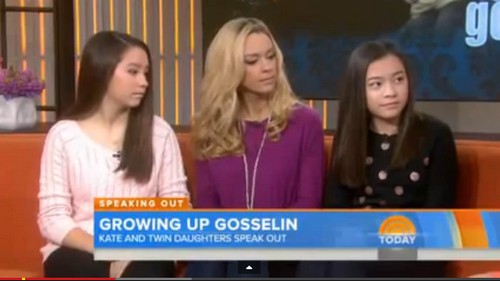 When Jon Gosselin first started spouting his tirades at Kate Gosselin in interviews, everyone dismissed it as bitterness and jealousy. After all, there she was, with all her children and her cookbook and her People Magazine interviews, and he was broke and living as a waiter. Of course he would be angry and resentful, especially after the lawsuit that Kate put up against him.

However, the more we see of Kate’s children, the more we’re starting to get the feeling that Jon might actually be right on this one. It’s ironic – by trying to combat Jon’s accusations that she was a bad mother, she may have inadvertently proved them. First, she got her kids to speak to People Magazine in an exclusive interview, but the biggest headline to come out of that debacle was that Cara Gosselin and Mady Gosselin thought that their mother was ‘annoying‘. Then, the most excruciatingly embarrassing interview came on the Today show, courtesy of Kate, her twins, and Savannah Guthrie.

Kate brought her twins on the show to open up about their lives post-reality show and their father’s departure, but instead of defending their mother and their lives, they just went silent. They refused to say anything, and not only that, but they seemed sullen and angry. You could almost see Kate’s blood boiling, and now, behind-the-scenes sources are opening up [courtesy of Radar Online] about what really went down.

The source explains that Kate could barely hold in her anger at her daughters’ silence, explaining that Kate even spoke to Cara after the interview about why she went quiet. The source adds, “She kept asking what happened and she simply shrugged her shoulders. This seemed to make Kate even angrier and she rolled her eyes to onlookers nearby.” The source also added, “We all genuinely felt for the girls. Kate is a tough cookie to please, it’s obvious that she expects a lot from Mady and Cara.”

Those kids are getting closer and closer to emancipation every day, and really, who blames them? Look at what they have for the sorry excuse of a mother and father.