Kate Gosselin Supermom: Gets Sick But Continues Running Errands For Her Children 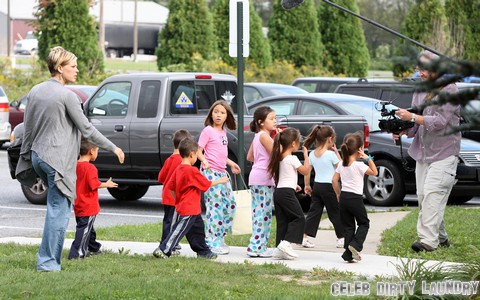 Kate Gosselin‘s tweets have recently had a similar undertone to them, almost a message. Before, she used to tweet about a variety of subjects, including some that she should have just left alone. However, recently, it seems like all she wants to do is prove to people that she’s a good mother. It’s an understandable impulse, considering her ex-husband Jon Gosselin has been vocal in bashing her parenting skills in interviews last fall. He called her a horrible parent and claimed that their kids were incredibly messed up as a result.

Kate is obviously trying to prove to the public that all of Jon’s allegations were false, and that she’s putting her kids above everything else. I mean, just look at her latest tweet – “Uh oh…Mom has a fever!?! Oh well..Meals 2b made, ‘undecorating’ to be done, cleaning & lunchpacking & the list goes on! #momsdontget2bsick.” She also added, “To bed early tonight 4me! So thankful I felt better 2day! I made Nanna Janet roast, did laundry, cleaned, &tried2control ice on driveway! #GN.”

See guys, Kate Gosselin’s totally a good mother. She takes care of her kids, even if she’s sick. She makes sure that they’re all fed, clean, clothed, read to, and taken care of. To be fair, the kids actually do seem like they’re doing well, even if that wasn’t the case a couple of years ago. So even if she consistently tweets about her parenting skills, at least she’s a better parent than Jon Gosselin? She can rest easy knowing that much, no matter what he says. It’s not like either Kate’s nor Jon’s image with the public is all that great, but everybody knows Jon’s pretty much a deadbeat father who barely takes care of his children.