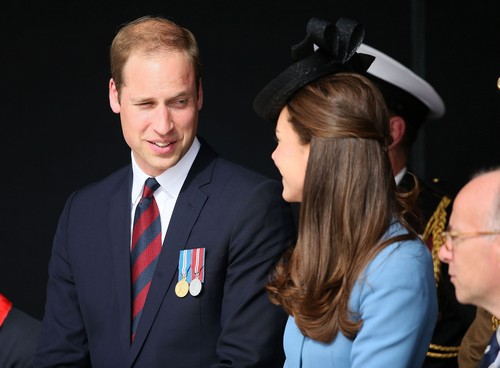 It’s about time we got stories about Prince William being jealous for a change, especially since we usually get reports about Kate Middleton’s insecurity concerning Will’s popularity with the ladies. But it turns out that the Duchess of Cambridge is equally popular with the lads.

According to reports, a D-Day veteran named Arthur Jones [who was quite old, might we add] decided to try his luck with Kate, asking her for a kiss when she sat next to him. She obliged, and he gave her a kiss on the cheek, much to passerby’s delight. However, Jones later recounted the tale and added that Prince William confronted him [albeit jokingly] about hitting on his wife. He explained, “As the prince (William) left he said to me ‘Were you chatting up my wife?’ I told him I only gave her a kiss. William laughed but I’m chuffed I’ve chatted up a princess.”

Yeah, Will is lucky that Jones just happened to be 88 years old. Granted, most D-Day veterans are that age, but it’s very possible in the future that some younger and much more attractive veteran decides to proposition Kate in the same way, and how would she be able to say no without offending him? She’d have to risk causing an international incident if she didn’t honor the veteran’s request, and the royals have had enough backlash recently – they don’t need more.

I’m actually curious to see how Prince William handles jealousy, even if he pretends that he and Kate have never dealt with insecurity in their marriage. We already know Kate is extremely insecure about Will’s ex-girlfriends, but does Will feel the same way about Kate’s admirers and exes? Or is he confident in the fact that she would never cheat on him and risk her future as the Queen of England? Let us know your thoughts in the comments below.