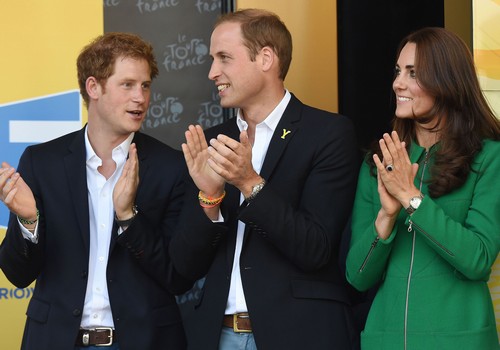 On Saturday July 5th the iconic Tour de France kicked off in Europe, and Prince William and Kate Middleton gave the cyclists a royal send-off at the start line. The Royal couple was accompanied by Prince Harry at Harewood House in Leeds, England. Prince William held the ribbon for the Duchess of Cambridge while she cut it with a pair of scissors, and the racers were off. This year marks the 101st Tour de France, the bicycle race passes through the United Kingdom, Spain, and Belgium, and comes to a close at the historic finish line in Paris, France.

Everyone is buzzing about the photos of Kate Middleton wishing the cyclists luck, and as exciting as the race is, it has nothing to do with the Tour de France. Kate Middleton’s face appeared much more puffy than it usually does, and the photos of Kate at the starting line have once again sparked rumors that the Royal couple is expecting another baby.

During May 2014 multiple sources claimed that Prince William wanted to have another child before Christmas, and the Royal couple was rumored to have set time aside in their busy schedule after their Australian Tour to start trying to conceive a second child. So, if rumors are true and they started trying to conceive when they returned from Australia, there is a very good chance that Kate Middleton is in the early stages of another pregnancy, and that would explain her puffy face and possible baby bump.

Check out the pictures of Prince William and Kate Middleton at the Tour de France, and let us know what you think. Does it look like Kate could be pregnant with baby number two?

Prince William, Kate Middleton and Prince Harry arrive and present at the prize giving ceremony of the Tour de France finish at Harrogate in Yorkshire, England on July 5