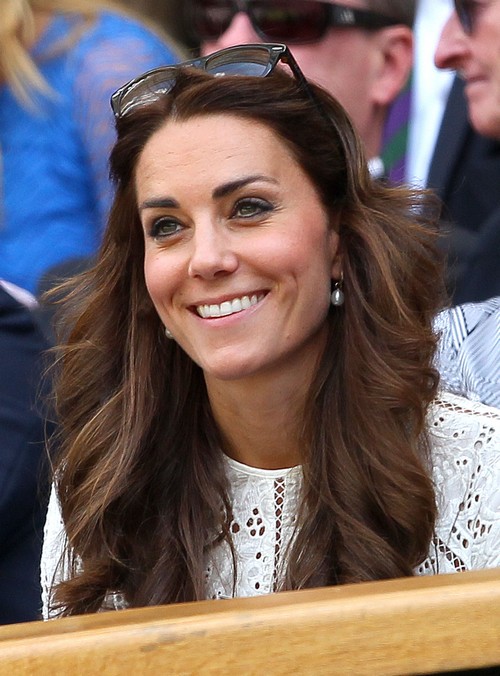 Kate Middleton is either bloated, pregnant, or recovering from plastic surgery. We’re going with option B, solely because her body still looks as thin as ever [so not bloated] and plastic surgery would have more tell-tale signs. Check out the Duchess of Cambridge and Prince William at Wimbledon today in the pic set below.

Kate was photographed doing some charity work on July 1st, (pics below) and in every single one of the photographs, Kate’s face looks oddly disproportionate. We can’t blame it on a bad angle or the sunlight hitting her face in the wrong way because it’s in every single picture! And honestly, Kate’s not oblivious enough to get plastic surgery done before making public appearances.

But you know what she wouldn’t have been able to control? Pregnancy. Plastic surgery, you can schedule for a different time. Weight gain? Takes too long, and Kate’s body is still stick-thin. But pregnancy? If she’s pregnant, she’s pregnant. There are very few ways to hide a pregnancy, especially with a public figure that’s so scrutinized by the press. She can wear loose clothes, and she can ever wear those damn fascinators on her head everywhere she goes, but it’s not going to distract from her face – not when she’s carrying such obvious tell-tale signs of pregnancy.

Of course, Kate didn’t have the easiest pregnancy with Prince George, but she’s definitely making more public appearances this time around. But that being said, I wouldn’t count on seeing her regularly over the next year, especially if she and Prince William follow through with their rumored plans and move to Sandringham.

What do you guys think? Is Kate pregnant? Let us know your thoughts in the comments below.