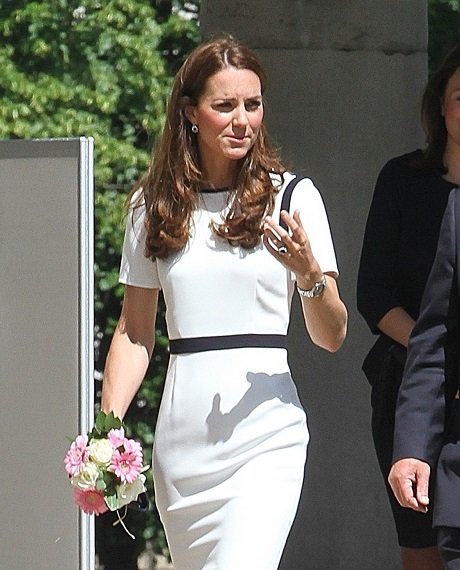 Several tabloid reports this morning suggested that Kate Middleton is pregnant again, this time with twin girls. According to Star Magazine, Kate was not only pregnant, but Kensington Palace supposedly confirmed the news, as did Prince William. They also claim that Will gushed over the news by stating that this was his ‘best Father’s Day ever’.

Um… sure? I don’t get how Star is so blatantly misinformed about this, especially since Kensington Palace clearly issued no such statement. If they had, it would have been breaking news on every major outlet, including CNN and BBC. Instead, Star just happens to be the only one covering this? Yeah, I don’t think so.

I can agree that Kate’s pregnancy rumors seem to be coming at an alarming pace, and if the press office at Kensington really wanted to stop the rumors, they would release a statement to halt the stories. However, they have not done a thing about it, and it’s clear why – this is serving as excellent media bait to help people forget about Kate’s bare bum scandal.

It’s media 101, and especially important for the young royals. Both Kate and Will are in the spotlight far more than their predecessors were, and their every move is analyzed and re-tweeted and re-blogged to everyone around the world. They can’t afford to make so many missteps, and all the good will that Kate garnered over the Australia tour has gone down the drain with her recent scandals. So yeah, of course the palace won’t stop the press from fixating on her pregnancy.

Just because Kate’s not really pregnant [especially with twins!], it doesn’t mean that people shouldn’t speculate about it. Star was clearly trying to come up with the most people-friendly version of Kate’s pregnancy, and what would be better for Kate’s fans than to hear about Kate being pregnant with two babies — and two girls no less!