Kate Middleton and Prince George Candid Video: Playing And Giggling With Baby – What a GREAT MOM! 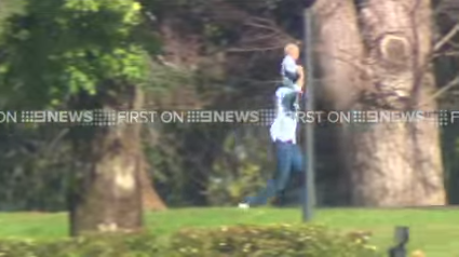 An extremely rare candid video of Kate Middleton and Prince George is making the rounds, and upon closer inspection, I can guarantee that it is seriously the cutest thing you will see all day. The video was reportedly shot legally from a public road [i.e. they weren’t breaking any laws unlike the Closer debacle regarding Kate’s nude pics], but it was taken without permission from the royals.

However, even if no laws were broken in obtaining this video footage of the Duchess and her baby playing together, it’s still technically an infringement of the royals’ rights. In fact, Australian Channel 10 [a mainstream broadcast channel] actually ran the sneaked footage and photographs, despite the wishes of the government and the royal family to leave them some privacy during their personal time and their days off.

Anyway, Kate and George were playing outside Government House in Yarralumla in Canberra. The video shows Kate running across the grass with George on her shoulders, bouncing him up and down and laughing with him. She’s also seen walking him in his stroller, pointing out the surroundings to him and explaining things. Throughout the entire footage, the nanny is nowhere to be spotted, not even in the background as she was during George’s play date.

I think this is a pretty definitive contradiction to all those people that say that Kate isn’t a hands-on mother. This is clear proof that not only is she a hands-on mother, but that George absolutely adores her. In fact, every time we’ve seen him with his mom, he’s always been happy and bubbly, laughing, squealing, and bouncing up and down. It’s obvious that he loves his mummy, and the feeling is obviously mutual.

Contrast this to North West and Kim Kardashian, who are only ever spotted together on Instagram or on paparazzi-accompanied walks. Nori doesn’t even come close to matching George’s bubbliness, and a part of that could be due to the fact that she doesn’t have that relationship with her parents. Plus, can you imagine Kim playing with Nori without cameras following her every move? Puh-lease, she’d much rather be getting another round of botox or stalking her fiance across the country, not playing [gasp] with Nori!

What do you guys think of this footage? Let us know your thoughts in the comments below.