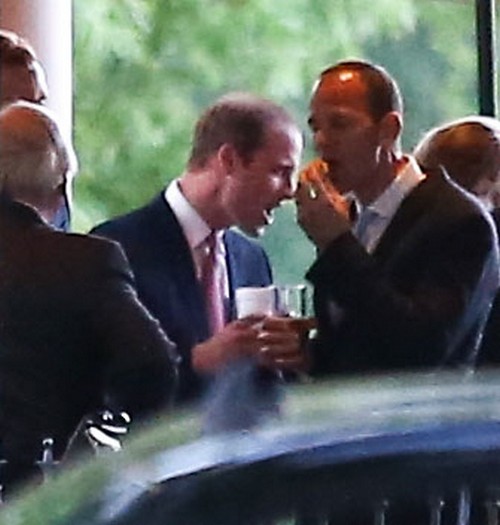 Kate Middleton and Prince William have a wonderful and trusting relationship, right? When they’re apart, Prince William stays locked up in his apartment and sits there, writing letters to his beloved wife and refusing to spend time with any other woman. HAH. As if.

Maybe Will and Kate really do have a trusting relationship, because Will’s recent partying would raise the eyebrows of anyone who’s been married. Do married men jet off to another for a good friend’s wedding without their wife, and then proceed to get absolutely hammered and flirt with numerous girls? Well, I guess married royals do, and in that particular scenario, Will is absolutely following the norm. I mean, we can’t have a future king that is actually devoted to his wife, right?

For real though, why couldn’t Kate have gone along with him? I mean, don’t most people bring their wives as their plus 1 to their wedding? And don’t give me that crap about Kate having to stay back to look after Prince George. They have a nanny, and if they can leave George with the nanny throughout most of the Australia and New Zealand tour, I’m sure they could have left him with her for a couple of days while they both went to the US.

Even apart from that, there’s also the little issue of Will coming into contact with his ex-girlfriends, too often for comfort, I’d imagine. For example, when Kate and George were in Mustique with her family last year, Will was spotted on vacation with his ex-girlfriend, Jecca Craig. Yes, there were other people there, but how on earth did Kate keep her cool with her husband hanging out with his ex? That too, on vacation? And that’s not even the only time that’s happened – with Cressida Bonas hanging around, you can bet that Will managed to run into his ex-girlfriend and love of his life, Isabella Calthorpe, Cressida’s half-sister and Kate’s mortal enemy.

Ok, maybe mortal enemy is a bit of an exaggeration, but there’s no doubt in my mind that Kate is extremely threatened by this woman and her hold on Will’s heart.

Basically, there are many, many incidents that would raise the eyebrows of any wife, much less a royal wife – and this Memphis trip just happened to top it off. Is it possible that Will is following the Cambridge family tradition of cheating on his wife? We’ve seen the way Prince Charles found Camilla Parker-Bowles even as he was married and had children with Princess Diana, and while I’d like to think that Will and Kate have a stronger relationship than that, you never know. I never thought that Will would party the way he did in Memphis, but there you go. Prince Harry may be the public face of the royal wild child, but Will’s just managed to keep his side hidden from the public. Now, the hypothetical cherry on top of the sundae would be adding a mistress to the mix.

Do you guys think Will would ever cheat on Kate? Let us know your thoughts in the comments below.