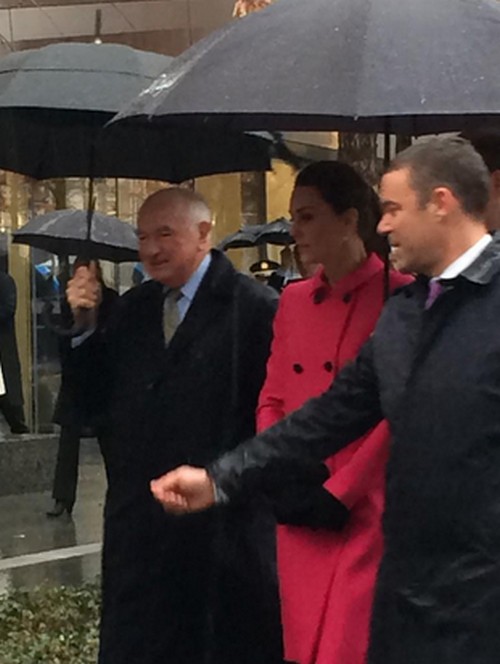 It’s day two and the final day of Duchess Kate Middleton and Prince William’s whirlwind visit to New York City and the USA. Last night, the royal couple went to Barclays Center to see LeBron James play in the Cavs game against the Brooklyn Nets. He broke protocol by placing his arm around the Duchess, but we’re sure that she shrugged that off.

James took to his Instagram account to say, “Wow what an Honor! This game has brought me so much and I’ll never take it for granted! The King, Duke & Duchess.” The Duke and Duchess were also presented with NBA jerseys to commemorate their time in the big apple – along with a smaller jersey for Prince George Alexander Louis.

On today’s agenda, the Prince William and Kate Middleton will pay their respects at the National September 11 Memorial Museum in New York. The royal couple will visit the newly opened museum before making their way to the CityKids Foundation where they will tour the facilities and check out the artwork created by the kids.

Later on, the Duke and Duchess of Cambridge will be in attendance at the “Creativity Is GREAT” reception which will be hosted by NeueHouse. Prince William will head out to attend the “Innovation Is GREAT” reception which is being held at the Empire State Building. Mayor de DeBlasio will be accompanying Wills on his visit – which will include a stop on the observation deck of the building.

Tonight, the royal couple will head to the Metropolitan Museum of Art to have dinner with Mary-Kate and Ashley Olsen, along with Tom Hanks and opera singer Renee Fleming. The duo will attend the fundraiser for the University of St. Andrews, their alma mater.

After all of the festivities, the royal couple will head back to Britain. Let’s hope that they both enjoy their stay, but we’re sure little Prince George misses his parents.